It has been mostly raining since I arrived in mid-August in Southern Brazil. One of the few exceptions was the very hot Sunday of 1 November (36° Celsius) when Ricardo, a native of Santa Cruz do Sul, drove John (from Bakersfield) and me to the "interior" which in our case meant a ride on dirt roads into the middle of nowhere where we also came across two cemeteries - one showed a very colourful mix of styles, the other was more of the traditional European kind with one tombstone already displaying the date of birth and the photograph of a woman who however is seemingly not yet buried there. Extraordinary planning, I'd say. 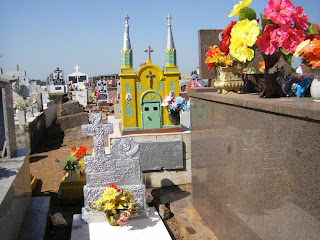 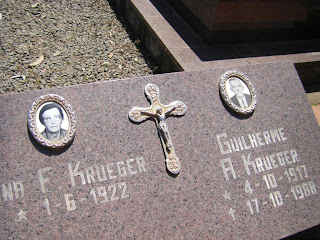 John here. Yes, the colors of paint and abundant flowers gave a stark contrast of life upon a backdrop scene very quiet and(not to mention), dead. At least one of the cemeteries was totally remote and isolated in the rolling fields. That's a long moment of silence.

Well, at 87 she could be dead---and she doesn't look much like a spring chicken in that foto---and if so, her survivors could've forgotten where she was supposed to go and they could've put her somewhere else.

I have a friend who's ALWAYS VERY late wherever he goes. We say of these people that they "will be late for their own funeral". For all we know Mrs. Krueger may be delayed by something more innocent such as being dead in a rocking chair in front of the TV without anyone knowing about it for weeks or even months.