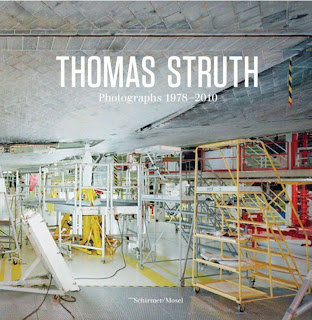 From the press release I've learned that the 300 images provide "a broad and representative overview of the Duesseldorf-based photographer's work over the last 30 years. Along with highlights of his artistic oeuvre ... (they) include very recent, previously unknown images of laboratories and scientific equipment, exploring large research institutions and high-tech plants. They quite clearly mark the start of a new thematic strand in the artist's work and demonstrate his interest in the complex, visual structures produced by complex, technical systems. For Armin Zweite, author of one of the informative essays of the book, the photos appear 'at first sight like a reflex to the globalization trend of the global civilization'. Of special relevance to recent events is the photograph of a South Korean shipyard with a semi-submersible offshore drilling platform - a steel giant to which Struth lends a monumental quality."

When glancing through the pages of this beautifully done tome, this South Korean shipyard was the first photograph that made me stop and scrutinise it. Although I do not understand what "a monumental quality" means, this semi submersible rig caught my attention because ... well, I first wondered why it was put in the book for it did not strike me as a remarkable shot at all, quite the contrary, actually: a picture that (almost) anybody could have taken. Anyway, it made my thoughts wander and, yes, that also included the BP oil rigs in the Gulf of Mexico, but I did not perceive it even remotely as 'a reflex to the globalization trend of the global civilization'. That of course has also to do with the fact that I'm somewhat at a loss as to what these words might mean.

Since the captions do not offer much of an explanation, the viewer is allowed to do with these pics whatever he deems fit. Okay then, I'm less interested in what the photographer had in mind (if that matters, he could have told me - I'm not much into guessing) than in what photographs do to me, and so I've asked myself: what do these photographs do to me?

My favourites in this tome are the ones from Lima. Since I've never been to Peru, what did I associate with these pics? Well, scenes from the Latin American countries that I've visited, and especially from Mexico and from a town in Northern Argentina, I do not recall its name, where I experienced the same sensations that I did (and do) when looking at Struth's Lima pics that all show a grey sky and ordinary, functional buildings: nothing special, liberated from the obsession that there must be meaning.

Thomas Struth concerns himself with "situations of reality", says the press release. Although I find this an unfortunate way to put it - I think Struth concerns himself with the ordinary - , his focus on the aesthetically unspectacular is one of the elements that attracts me to his work. Another reason is his often original approach. An example is the "Audience" series taken in the Galleria dell'Accademia in Florence. Here he photographed people looking at works of art. The shots convincingly demonstrate once again that real life scenes are far more interesting than what our imagination can come up with.

And then there are the wonderful museum pics. Some of them show visitors in a way that seem to resemble the paintings on the walls. 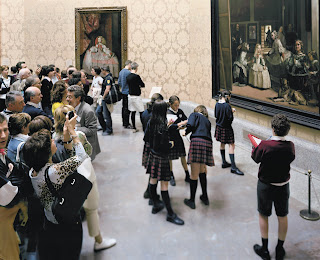 And then the street views. And the Asian skyscapers. And ... To spend time with this book is in many ways an enriching experience.

When I finally returned to the plates at the beginning of this volume I found myself having a closer look at a pic that I had previously not paid attention to. For the simple reason that I had no clue what I was looking at (the caption "Tokamak Asdex Upgrade Periphery Max Planck IPP, Garching" wasn't exactly helpful) and did not feel attracted to the composition either. Meanwhile however I've come across some interesting thoughts by Matthew B. Crawford (in Shop Class as Soulcraft) who makes the point that in our modern world we increasingly get less and less to see of the interior of complex machines. With this in mind, this and similar pics all of a sudden seemed truly worth contemplating. 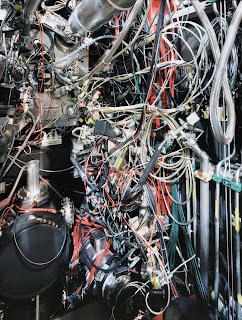