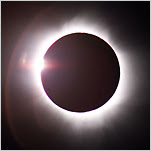 Why I Never Miss a Solar Eclipse
By Jay M. Pasachoff
9 July 2010, The New York Times

On this Pacific outpost, 2,200 miles west of the South American coast, hundreds of us have gathered, exchanging warm greetings and catching up on life since we last saw one another — in the Galápagos five years ago, or in Zambia nine years ago, or in Papua New Guinea 16 years ago. We are umbraphiles: having once stood in the umbra, the Moon’s shadow, during a solar eclipse, we are driven to do so again and again, whenever the Moon moves between the Earth and the Sun. In 1959, I saw my first eclipse. Sunday afternoon, I’ll see my 51st.

Eclipse No. 1, 1959: Aboard an airplane flying over the Massachusetts coast. As the full Moon covered the Sun and the sky darkened to black, the Sun’s corona outlined the Moon in white. I was hooked.

No. 3, 1970: In a cloudless sky over Miahuatlán, Mexico, south of Oaxaca. As eclipse darkness fell, the stars and planets came into view.

No. 5, 1973: An extraordinary seven-minute eclipse north of Timbuktu, Mali. In Kenya, where we observed, it lasted five minutes.

No. 19, 1992: I chartered a jet to fly an hour south of Cape Town, South Africa, and the view was clear and spectacular.

No. 23, 1995: In Rajasthan, India. The light dimmed eerily as the shadows sharpened. Next, the dazzling diamond-ring effect, as the last ray of sunlight shone through a valley on the Moon’s surface, contrasting the lunar jewel with the still-faint solar corona forming the ring’s band. A stunning red loop of gas appeared at the Sun’s edge.

No. 29, 1999: West of Bucharest, Romania. Sunspots — at the peak of their cycle that year — made the corona bristle with giant streamers. We made great progress in our study of how the corona is heated to millions of degrees.

No. 47, 2008: In Akademgorodok, outside Novosibirsk, Siberia. Sunspot activity was now low, and coronal streamers extended only from the Sun’s equator.

No. 49, 2009: From mountains outside of Hangzhou, China, we videotaped clouds passing the corona, adding a dramatic effect to the eclipse (even as it made our data harder to process).

We’re here for the science, yes. But there’s also the primal thrill this astronomical light show always brings — the perfect alignment, in solemn darkness, of the celestial bodies that mean most to us.

Jay M. Pasachoff, a professor of astronomy at Williams College, is the chairman of the International Astronomical Union’s Working Group on Eclipses.
Posted by Hans Durrer at 00:01