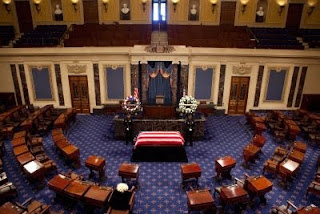 On 1 July 2010, the Lens Blog of the New York Times published a photograph by Stephen Crowley of the coffin of the late United States senator Robert C. Byrd of West Virginia in the Senate chamber. "This is a historic photograph", David W. Dunlap ("The Guardian Dies and a Senate Door Opens") commented, "because of the fact that it was taken at all — not by a Senate photographer with Senate equipment, but by a photojournalist with his own equipment on behalf of news organizations worldwide".

It looks as though this was the first time that a news photographer was allowed in the Senate chamber since 1961 when a portrait of then Vice President Lyndon B. Johnson in his capacity as president of the Senate, which was not in session when the picture was taken, was permitted

“This is a giant leap for transparency in government,” Mr. Crowley was quoted as saying. While one can understand that he was grateful to be given this opportunity for pool coverage, this statement seems to be, well, slightly exaggerated.

Yet what got my attention was not so much Stephen Crowley's photograph of Mr. Bird's coffin but the photograph by Mark Abraham that shows how Mr. Crowley is photographing the Senate chamber. Looking at the two photographs together, one gets to see the process of picture taking. 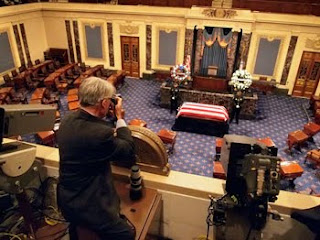 Picture taking is first and foremost about framing, and to frame means to quote out of context (and thus define a new one) which is, in the words of John Szarkowski, "the essence of the photographer's craft: His central problem is a simple one: what shall he include, what shall he reject? The line of decision between in and out is the picture's edge. While the draughtsman starts with the middle of the sheet, the photographer starts with the frame. The photograph's edge defines content."

These two photographs seen together make this decision process visible and thus demonstrate that the image we finally get to see could have been taken very differently. These two pics however also illustrate that what pictures made by a camera show is not what the naked eye gets to see.

Again John Szarkowski: "More convincingly than any other kind of picture, a photograph evokes the tangible presence of reality. Its most fundamental use and its broadest acceptance has been a substitute for the subject itself - a simpler, more permanent, more clearly visible version of the plain fact.

To show the photographer's hand, to make visible the process of his picture taking, robs us of the illusion that a photograph reflects reality for it's magic lies in the fact that we usually do not know, and that it does not show, how it came about. It is thus up to us what we want to see in a picture which is why we treasure photographs so much - for they confirm what we have decided to see as reality.
Posted by Hans Durrer at 00:01