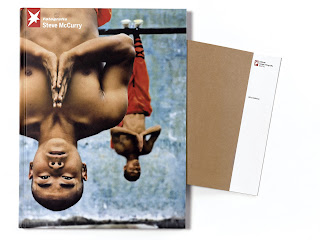 End of June, I went to see an exhibition of Steve McCurry's photographs in Copenhagen. I do not recall a photo-exhibition that has impressed me more. This had not only to do with the photographs but also with the venue, a huge hall, divided into several smaller ones (Øksnehallen).

The Afghan girl with the green eyes, taken in 1984, is very probably McCurry's best known picture. At the Copenhagen exhibition, a video documentary about the search for the girl (nobody seemed to know who she is) was shown - despite press reports to the contrary, she has not been found. That is what I remember. Later on, however, I've read that McCurry claimed that she had indeed been found. 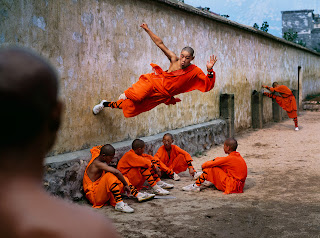 Many of the photographs in Steve McCurry's stern FOTOGRAFIE Heft 68 / 2012 were shown at the Copenhagen exhibition. I thought especially the colours extraordinary and was wondering whether these were colours actually found in real life or whether the pics were heavily photoshopped. stern-Artdirector Johannes Erler writes in the foreword: "Steve McCurry does the impossible. He bewitches us with colours in a way only nature and her elements otherwise do. We look at his photographs with a sense of amazement and wonder whether what we are seeing is actually real. But is has to be be. Otherwise these pictures would not exist". In regards to some of the pics in this tome, I'm still not sure ... but there is no doubt: these colours are truly stunning and superb. 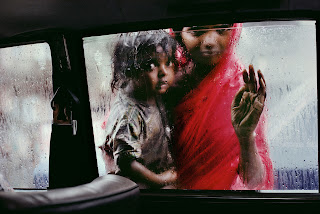 "After a while I developed a certain method of working where I either got my shot quickly before I am noticed; or I hung around my subjects so long until they get bored or accostumed to me and continue about their usual routine", McCurry states. The latter must have been the case when he photographed the fishermen on stilts in Sri Lanka, a painting-like shot that to me, in regards to colours, seems almost too good to be true.

The photographs in this tome were taken in Afghanistan, India, Pakistan, Sri Lanka, Peru, Japan, Saudi Arabia, Kuwait, and New York, and they are accompanied by an informative essay by Jochen Siemens who, among other things, quotes McCurry's conviction that "you have to search for every single picture" for the simple reason that "pictures don't just walk past you". Good point indeed! And much more convincing than this one: "McCurry says that he could imagine all his pictures in black and white". Apart from the fact that I find this difficult to believe (on the other hand: what do I know of this man's imagination?), I'm not terribly sure what he wants to say with this for it is precisely the colours that make his pictures so special.

In sum: I love these photographs!
o warm to McCurry's state, I do warm to cCurry's statement: "I want to be part of a trad
PS:  stern FOTOGRAFIE Heft 68 / 2012 is accompanied by Talents - the booklet in which McCurry talks about Kitra Cahana, "who published her first picture of the Israeli withdrawal from the Gaza Strip on the front page of the New York Times in 2004 - at the age of just 17". The photo below shows highschool seniors filming their friends during their weekly Fight Club. 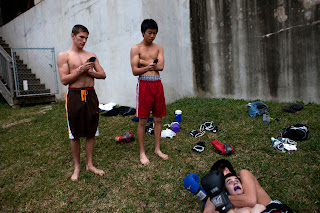