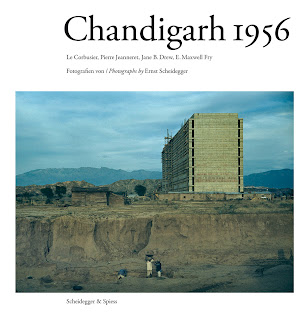 First things first, I'm fascinated by cities that originated from the drawing board, be it Brasilia, be it Chandigarh. They let you breathe freely, they are not constrained by history.

In 1947, India gained independence from British rule. The subcontinent then split into two nations, Pakistan and India. Because Lahore, the former capital of Punjab was now located in Pakistan, the Indian part of the state was in need of a capital - and so Chandigarh was planned and, in 1956, "began to establish itself in the professional media as a prime laboratory of contemporary architecture and urban planning", I read in the introduction. I also learned that when Le Corbusier was approached by two high-ranking Indian officials, he first turned down the offer for he was not willing to leave France and move to India for this project. 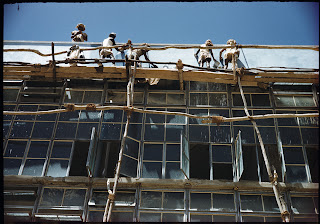 The contribution "Notes on Photography and the Architectural 'Non-Finito'" by Stanislaus von Moos, I thought particularly interesting. For insights like these:
"When Scheidegger began traveling the world as a reporter, it was not really the uniqueness of a story and the snapshot that interested him most, even though the genre (documentary photography) as well as the affiliation (Magnum) implied a commitment in that direction. Rather, it was the quiet observation of ordinary people as they go about their daily lives and their labors. For like any ethnographer, he knew that in order to know people one needs to observe them patiently in their rituals and more specifically in their work rituals".

To me, it felt like Ernst Scheidegger liked what he photographed.

Photo projects don't arise from thin air. Verena Huber Nievergelt ("Between Photojournalism and Architectural Documentation: Ernst Scheidegger's India") let me know that in the 1950s, when Scheidegger visited Chandigarh, it was "the great decade of human-interest photojournalism, before the field was slowly but surely taken over by television in the 1960s". In those days, "India was a classic destination for photojournalists". Scheidegger did not only photograph the buildings but also the men and women working on the sites as well as some of the future inhabitants. 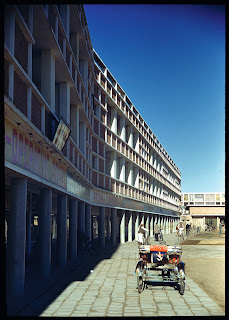 
What Ernst Scheideggers impressive photographs (in black/white and in colours) make us see is the beginning of a settlement; they remind us that Chandigarh spent years as a colossal construction site (the same holds true for Brasilia). Documenting such a process means to show and thus demonstrate that life is in a constant flux – and that is helpful to be reminded of. And, what's more: these intelligently, with an extraordinary sense for proportions, assembled pictures make you feel it.

PS: The photographs in this remarkable book were for years consigned to the archives and are now published for the first time. A big thank you to the publisher!