PRIVATE, the international review of photographs, dedicated its issue number 50 (autumn 2010) to "China: True or Real?" When I asked PRIVATE's picture editor, Véronique Poczobut, for a review copy and some jpgs of her choosing, I was curious what pics she would select. The ones by Wang Mei I would have chosen myself for, despite that they were taken in Northwest China, I remember having seen similar scenes of magic in the mountains of Fujian Province, in China's South. 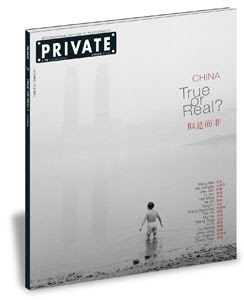 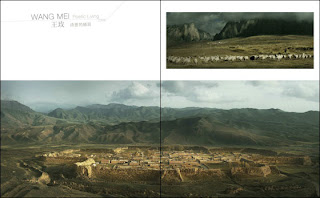 Liu Jingxun's black and white photos show, well, I'm not sure what they show but the title "Other Places" is certainly an apt characterisation of the photographer's artfully playing with light. As he himself says: "Photo-shooting is like sleepwalking in the God's world in a dark night." No wonder his photos radiate a meditative quality. 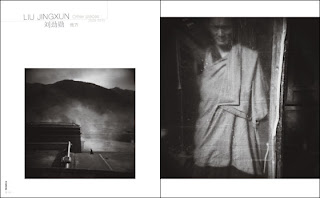 Zhang Xiao's series is called "They". The photos were taken mostly in the city of Chongqin and some towns nearby. Chongqin is located in the Southwest of China, on the banks of the Yangtze River, and became "a major economic centre" in the last few years. This is a bit of an understatement for Chongqin is huge (population 33 million) and is one of the fastest growing cities in China.
The photos show locals in a variety of (mostly posed) life situations. I can't really say what makes them so special to me but they made me go back and look at them again and again. I simply did not seem to tire of them. 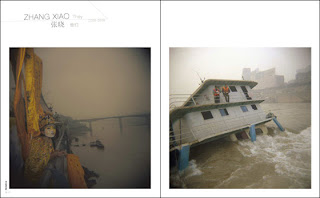 There are many more convincing shots in this tome. My favourite is Ma Hongjie's "Family Stuff", a series of pics that shows families with parts (or maybe all?) of their household. The only reservation I have about this recommendable issue is the quality of the texts. Let me give you an example: "'Family Stuff' reveals the interior structure of Chinese society. It brings out the original family life and interprets the life philosophy made of tangible materials under contemporary social context." This is not only bad English, this is simply incomprehensible. You are well-advised to concentrate on the pictures, they are truly worth your attention.
Posted by Hans Durrer at 00:01