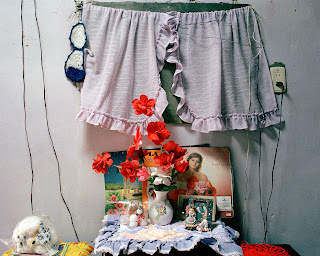 Guadalupe Ruiz' Bogotá is a nicely done book, in a rather unusual format (235 x 160 mm), edited by Joerg Bader, and with a text in English, French, Spanish, and German, from which I learn: "Guadalupe Ruiz Cifuentes travels between two worlds: South America, where she was born, and Europe, where she lives; or, to be more precise, Colombia, where her family - whom she sees regularly - is based, and Switzerland, the country that gave her her artistic training and her first exhibitons. Thus she also travels between two cultures: the Latin world of the Americas, marked by the Baroque and Catholicism, and the European world of austere Nordic culture, marked by Calvinist Protestantism."

Well, I must admit that I find it a bit peculiar to describe Switzerland as an "austere Nordic culture, marked by Calvinist Protestantism", just think of the Ticino or of Obwalden, but maybe the author was referring to Geneva ... the book was done in cooperation with Éditions de la Photographie Genève. 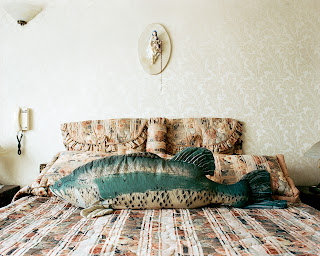 .
How do you visually document social and economic inequalities of a city?
Guadalupe Ruiz opted for a rather unique approach: she decided to photograph the houses, apartments, streetscapes, interiors, and furniture of residents from Bogotá's six different taxation classes. Does it work? Do you really come away with a pretty good idea/picture of the social and economic inequalities that govern Bogotá? I'm not sure. First of all: Had I not been told, I wouldn't have known that these pictures were taken in Colombia, they could have been taken almost anywhere in Latin America. Secondly, I wonder what showing, for example, different kinds of beds in different houses can possibly tell me of a city except, of course, that some people can afford nicer beds than others. 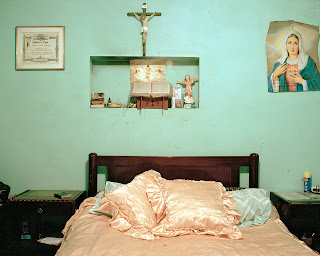 Nevertheless, I've enjoyed spending time with these photographs because I find it interesting to see in what surroundings people live. It felt a bit like peeping through a keyhole.

Editor Joerg Bader aptly observes that "an unashamed fondness for kitsch" is shared by all social classes, and that not one of the homes photographed lacks a television set. Unfortunately, he then proceeds by stating: "While the photographs of TV sets do not occupy the central column in Guadalupe Ruiz' hanging, television does in fact function as a vertebral column in the lives of all these residents" and goes on to elaborate on the importance of the telenovelas in South America. True as this may be, it has absolutely nothing to do with the photographs in this book. 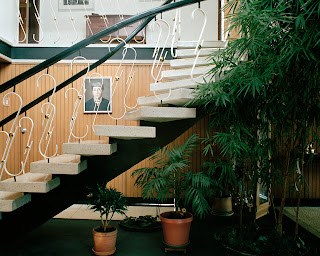 It is on purpose that I do not tell you from what taxation class the above pictures are. Have a guess! Should you then want to know whether you've guessed correctly, check out the book - it is worth it.