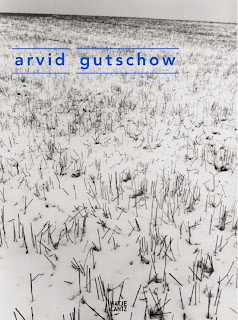 As it is common in photo books, the captions can be found on the pages in the back. And often they are so uninspired that they should have been left out entirely. The one of the above pic says: "Untitled (stubbles in the snow)", it was taken in 1952. More useful would be to tell the viewer when and where the picture was taken, and in what mood the photographer had been. Needless to say, I'm aware of the difficulties ... but nevertheless ... 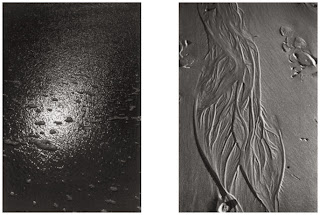 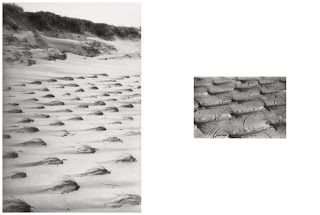 Arvid Gutschow (1900 - 1984), I learn from Stefanie Odenthal ("A significant photographer and almost forgotten"), was a self taught photographer who began to take picturing the landscapes of the outlying areas of Hamburg at an early age. Photographing was then very different from today. "My father was a businessman. He took photographs while hiding under the black cloth of large cameras ... When I got older, I took pictures with the same box cameras and also a Stegemann camera."

Gutschow studied law and became a high-ranking official in the city government of Hamburg; taking photographs was done in his spare time. In 1930, his photographic book See Sand Sonne was published and made him well-known. Most of the pictures were taken on the Island of Sylt, Thomas Mann was supposed to write the foreword but had to bow out due to time constraints.

I very much liked Stefanie Odenthal's approach to See Sand Sonne and feel that one would be well-advised to consider approaching the now available book (published by Hatje Cantz and Alfred Ehrhardt Stiftung) in the same way: "One makes ones's way through the book as if taking a walk, in which the viewer follows the movements of the photographic gaze."

Andreas J. Büchting ("Memories of Arvid Gutschow: Fragment of a late friendship") was a close friend of Gutschow, who "tended to look at the world around him through the lens of a virtual camera, often by holding an 'O' shaped by his thumb and forefinger up to his eye." They traveled together through Switzerland, South India, and Western Europe. "In India, his photos focused on the details of agriculture and especially of people: people's faces, clothing, perticularituies. But ever and again the faces, eyes, their beautiful features. In the course of this, he became fascinated with colors, for without color, life in India will barely let itself be captured." Too bad that there are no such colorful pictures to be seen in this well-done book.