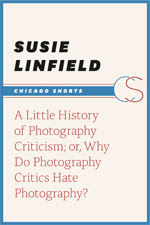 For Charles Baudelaire and his American contemporary, Margaret Fuller, "the critic's emotional connection to an artist, or to a work of art, or to a genre, is the sine qua non, the ground zero, of criticism", Susie Linfield contends and I wondered whether there was anybody out there to dispute that or, differently put, why would anybody bother to criticise the work of an artist if there was no emotional connection? Well, according to Linfield, photography critics "view emotional responses – if they have any – not as something to be experienced and understood but, rather, as an enemy to be vigilantly guarded against."

Susan Sontag, for instance, described photographs as "a sublimated murder – a soft murder" and ... No, I won't go there anymore, see here; Allan Sekula decried photography as "primitive, infantile, aggressive" and then there was Bertolt Brecht who famously stated that "a photograph of the Krupp works or the AEG tells us next to nothing about these institutions.". Needless to say, Brecht is right. On the one hand, that is. But, Linfield argues, photographs also do something that no other form of art or journalism offer: "an inmediate, viscerally emotional connection to the world." I love that, it is a real heart-opener!

The good thing about Linfield's text is that she presents an alternative: How she describes what she sees in the picture of two boys by the Iraqi dentist Ahmed Dhiya, what feelings and thoughts this pic aroused in her, is enough reason to read this Little History of Photography Criticism.