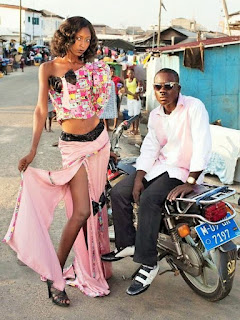 When looking at the pic above, the module on international journalism at Cardiff's School of Journalism, Media and Cultural Studies, fifteen years ago, comes to mind. We were shown a fashion show at a rather posh hotel in Lilongwe, the capital of Malawi, as an example of how one might break the stereotyped reporting (war, famine, dictatorship, corruption etc.) from Africa.

I love to dress like I'm coming from somewhere shows images from the African Continent that were taken by Swiss photographer Flurina Rothenberger who grew up in a rural town in the center of Côte d'Ivoire. The photos were taken in many countries, from Morocco to Ethiopia to South Africa.

The pictures come without captions and so I assume that where they were taken does not matter. And so we only know that we are looking at Africans in Africa. And, at some African scenery. Apart from the fact that most of the pictures do appeal to me, I'm sceptical of such an approach

Well, maybe the photographer thought it a good idea to not tell us where her pictures were taken, maybe she wanted to demonstrate that it doesn't matter where in Africa the people portrayed are from. I'm just guessing of course ... 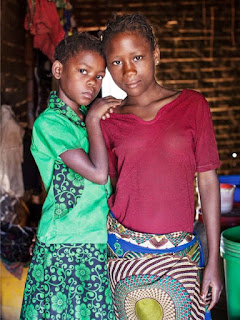 "This book is a tribute to ordinary life. No spectacular or sensational incidents, just selected observations from countries in Africa I have worked or stayed in over the past ten years", writes Flurina Rothenberger.

Although I like many of the pics (the vast majority seem staged) in this tome, I do find a book with such scarce information a bit cheap. It is as if someone is throwing pictures on a table and saying: Do with them what you want. I'm too lazy to give you any context. And, I do not want to. For I do not want to tell you what you have to see. Just see for yourself.

It might however also be that Flurina Rothenberger simply doesn't remember where she took the pics, and maybe she doesn't know more about the persons in the photos than we can see.

Do these images help to see Africa differently? Devoid of the usual stereotypes? Yes and no. Yes, in that they show ordinary, unspectacular scenes, albeit often posed. I often had the sensation that the people portrayed looked at me (and I rarely experience that when looking at photo portraits). No, in that these diverse pictures (that to me radiate a humanness that I much warm to) also cement stereotypes by implicitly stating that the people portrayed need no names, that it doesn't matter what they do in life and where they are from.

Flurina Rothenberger
I love to dress like I'm coming from somewhere
Edition Patrick Frey, Zurich 2015
Posted by Hans Durrer at 00:01