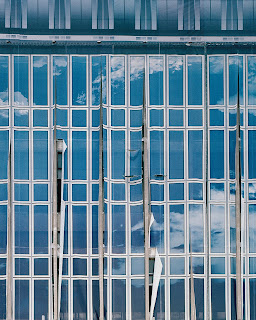 Legend has it that the „Potemkin Village“ originated in an effort by Russian Field Marshal Grigory Aleksandrovich Potemkin „to conceal from Empress Catherine the Great the shabby state of the villages in the recently annexed territory of Crimea in 1787. Walter Moser, Chief Curator for photography in the Albertina, Vienna, one of the contributing writers to this tome, labels it „an anecdote most likely invented by Potemkin's political adversaries“.

Starting in June 2015, photographer Gregor Sailer, who is based in Tyrol, Austria, traveled to Russia, Sweden, Germany, France, England, the United States, and China in search of Potemkin Villages or, differently put, „fake towns“.

In the Russian city of Suzdal, for instance, he photographs faux façades that were pasted onto rundown buildings (in anticipation of a visit by President Vladmir Putin in 2013). He also takes pictures in the city of Ufa, in the Ural Mountains, where in 2015, as Walter Moser writes, „entire streets were masked behind tarps and banners to make it look prosperous and well kept even in the glare of the limelight forced upon it by a Triple Summit of the BRICS states, Eurasian Economic Union, and Shanghai Cooperation Organisation“.

Photographs, by their very nature, can only show me what has been in front of a camera at a given moment. They do not inform me whether someting is real or not for what they record are surfaces. And precisely because of this I do find looking at these photographs fascinating – I do know that my eyes are fooling me but with the help of my brain I'm able to correct what the pictures suggest. Or, differently put, what I know about a photograph helps me to see it differently.

For the full review, go to http://www.fstopmagazine.com/