The lady sitting next to me on the flight from Zurich to Tokyo was born and raised in Japan and has  been living in Switzerland for more than twenty years (her husband whom she met when he was working in Tokyo is Swiss) and thinks the Japanese similar to the Swiss (reserved and correct). Japan has also four seasons, the landscape however is different, she says. Sitting on the train from Narita to Kamakura, I wonder if there is any – I only see concrete house after concrete house.

I did not prepare at all for my three-week trip but soon abandoned my vague idea of visiting Kyoto (two books I once fancied happen to take place in Kyoto) when walking through the packed centre of Kamakura –  I sort of knew that there were a lot of people in Japan, I had however no idea that there were that many! And, surely, in well-known cities like Kyoto it must even be worse and so I decided to visit only places I hadn't heard of. 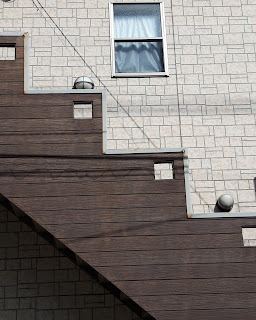 Daichi Koda, a photographer whom I once helped with the English version of his then homepage, suggested a route, booked my hotels for my first week and off I went – when later on I was on my own, choosing places and organising hotels became rather difficult (I had no reference points and there seemed to be much more information available in Japanese), once I ended up in a place that was one and a half hours by train from my intended destination.

Japan is most definitely the weirdest country I've ever been to. The huge crowds on the trains and subways were mind-blowing and observing them –  people were either sleeping, staring at their mobile phones or listening to music (if they enjoyed what they did, they surely didn't show it) – I occasionally wondered why they wanted to be alive. I know, I know, it is pretty much everywhere like that yet I felt it more intensely so or so it seemed. Strange, these moods ...

At the same time, it is also one of the most impressive countries I've ever visited – organised, disciplined, friendly. Boarding a train in Japan is a civilised matter, boarding a train in Switzerland is mostly a display of primitivism.

At the information centre in Toyohashi I was told there was a bus to the beach and that it would take roughly two hours to get there. The young woman got out the itinerary, placed it in front of her, took a ruler and started to underline ... whatever it was  ... but stopped all of a sudden, looked at me and said (smilingly, of course): Sorry there is no bus ... 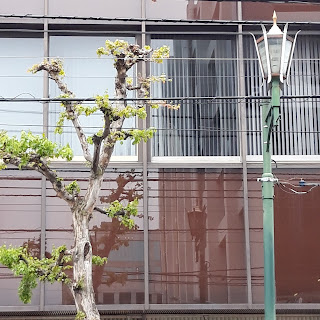 When in Oami, I learned that the famous 99-mile-beach was a 30-minute bus ride from the station and that there was also a hotel. I imagined a ride through vast fields to a lonely old hotel sitting on a cliff ... well, it was a ride through a stretch of suburbs and the hotel turned out to be a huge complex that seemed to cater to a variety of Japanese entertainment and shopping needs. My own shopping? Sushi and leechee juice, every day.

What, by the way, contributed to my treasured and enriching visit was the flight: 12 hours without the fasten your seatbelts signs coming on because of turbulence – on both flights. A first for me!
Posted by Hans Durrer at 00:01