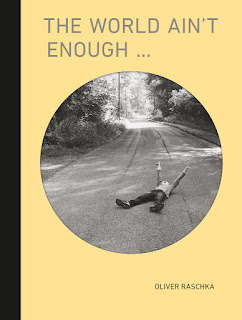 Oliver Raschka, trained in economics and psychology, lives in Stuttgart, Germany. As a photographer he is essentially self-taught, in addition he attended numerous workshops with renowned photographers.
The world ain't enough ... documents the first ten years of his two sons. The black and white photographs show them at home and at play, at sporting events and when shopping. One senses not only the boys' excitement, the father's joy is also palpable.

The cleverly composed photos seem to have been taken with an idea or concept in mind of how to juxtapose the brothers or to contrast one of the two with his environment. Not all of them but quite some. Oliver Raschka however informs me that he tried to capture moments of life as it unfolded. “I don’t ask my sons to pose for me. It’s all about pictures from real life …”.