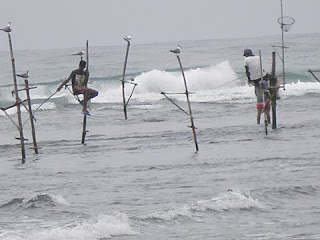 Sri Lanka 2014
What made me photograph these fishermen? My best guess is this: I had seen such pics before and wanted to shoot my own. I remember a guy observing and then approaching me: He wanted money from me for taking these photographs. Needless to say, I didn't give him any but couldn't stop wondering what sort of world we have created. 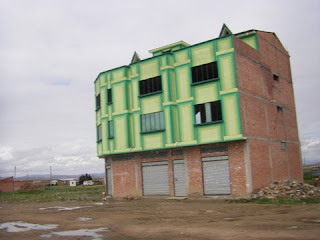 Bolivia 2014
I shot his picture from a car. This is surreal, I thought when we were passing by. For one reason or another, it reminded me of the former Soviet Union that, by the way, I've had never visited, only seen pictures of. What also comes to mind: buildings on a high plateau near Quanzhou in China where a Chinese English teacher once had taken me on his bike. 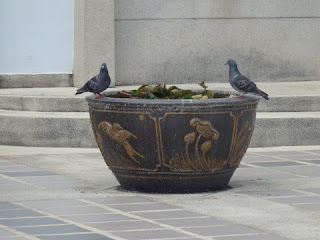 Chachoengsao, Thailand, 2016
Taken near the large swimming pool of a very nice, big and almost empty hotel outside of town. Two things come to mind when thinking of my time there: I suffered from an eye infection that I treated with wet tea bags. How's your eye?, asked the waitress at breakfast. I think it is okay now, I replied but she wasn't impressed and brought me two more tea bags. And: The hotel manager who told me about an increasing mosquito plague to which an acquaintance of his had recently succumbed. 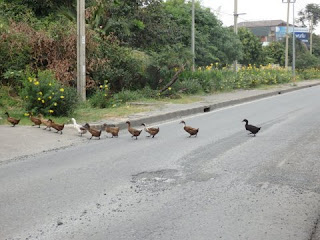 Lat Krabang, Thailand, December 2016
After "my" hotels on Sukhumvit and Ploenchit had disappeared; I usually stayed at Lat Krabang, close to Suvarnabhumi airport, where this picture was taken. One day, my friend Jing came to visit from Thonburi. On our way to lunch, she spotted a 7/11, headed for the door, turned around and asked: Do you want something? No, I said, and wondered what she needed for we had almost arrived at our restaurant. I need air con, she smiled and entered the 7/11 store. 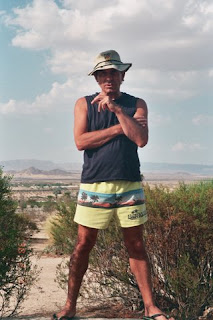 29 Palms, California 2007
In the summer of 2007, I spent three months as a ghostwriter in the Californian desert. What made me pose like this in front of the house that I was inhabiting at the time? No idea really. Maybe my subconscious imagined me as a cowboy. The photo was taken by my friend Emelle.
Posted by Hans Durrer at 00:01