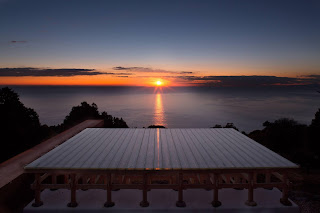 Winter Solstice Light at Enoura Observatory
The firm New Material Research Laboratory (NMRL) was founded in 2008 by Hiroshi Sugimoto (born 1948) and Tomoyuki Sakakida (born 1976) and is guided by the idea that “The oldest things are the newest.” Since I’m at a loss what this exactly means, I turn to the press release that informs me that “Sugimoto and Sakakida founded New Material Research Laboratory with an aim to develop “new” materials for construction based upon much older materials and techniques. The NMRL reinvigorates material from ancient times and the Middle Ages by using it in the context of a distinctly contemporary design sensibility and thus creating a physical connection between the past and the present.”

My interest in this tome is two-fold: On the one hand, things Japanese (mainly Zen ideas and design) have accompanied me throughout my life. Moreover, after a visit to Japan, two years ago, I became fond of writers like Haruki Murakami, Keigo Higashino and Mieko Kawakami. On the other hand, my fascination with the world of pictures that started with documentary photography (the stories behind the picture) has over time turned into being mostly attracted by the surface (what has been framed, that is) and it is the art of framing that defines architectural photography for me.