The winner of the World Press Photo Award 2010 was Pietro Masturzo's photograph of a group of women shouting from a Tehran rooftop in protest at the Iranian presidential results. To be sure, this is not what the photo shows (how could shouting be shown anyway?), this is what we are told that it shows. 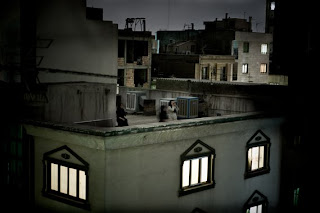 My first reaction was bewilderment as to why somebody would choose this to be an extraordinary photo and the more I looked at it, the more confused I became. Had I not been informed that the photo had been taken in Tehran, I would have not guessed it. Had I not been informed that the three women on the roof were protesting the Iranian presidential results, I would have had no way of knowing it.

This photo cannot show what it is said to show, it needs words to be understood. Sure, as Wilson Hicks of Life once said, “the basic unit of photojournalism is one picture with words” yet we have been taught to expect a photograph to be worth a thousand words and not to need a thousand words to explain to us what our eyes are seeing.

Jury chair Ayperi Karabuda Ecer said: "The photo shows the beginning of something, the beginning of a huge story. It adds perspectives to news. It touches you both visually and emotionally, and my heart went out to it immediately."

My experience was different in that the photo did not touch me either "visually and emotionally"; my feelings remained essentially indifferent. Had it not been labelled World Press Photo, I probably would not have given it a second glance. I did however wonder what the criteria could have been for choosing it for the World Press Photo Award 2010.

Juror Guy Tillim commented: "The difficulty in photographing conflict situations is one of portraying the parallel lives involved, of people going on with their lives. This picture has made a very good attempt at marrying these two elements, in giving the conflict a context - and that is a holy grail of photography. The photographer does it with a very beautiful image of an Iranian landscape, which would be worth looking at in itself. But it also arouses our curiosity about the woman shouting - incorporating this moment, the importance of this historical event. It represents a very honest and successful attempt at taking forward our vocabulary of showing things."

True, the "difficulty in photographing conflict situations is one of portraying the parallel lives involved, of people going on with their lives" except that none of this happens to take place in this picture. In fact, no parallel lives involved are shown. Moreover, the protesting women do not go on with their lives, they stand on rooftops shouting.

This picture gives "the conflict a context"? It is more likely the other way round: it is the explaining words that give the conflict a context. The picture, in this case, at best illustrates what words tell us. And, as regards the "very beautiful image of an Iranian landscape": While, as the saying goes, de gustibus non est disputandum, to qualify this picture as beautiful I find a bit of a stretch.

Juror Kate Edwards said: "The photo has a powerful sense of atmosphere, tension, fear - but also of quietness and calm, and in this sense was a challenge as a choice. We were looking for an image that drew you in, took you deeper, made you think more - not just about showing what we already know, but something that asks more of us."

On the one hand, there is no doubt that the choice of this image made many think more - although not necessarily about the picture but rather about the judgement of the jurors. Besides, does this image really radiate tension, fear, quietness, and calm? I'm increasingly inclined to think that we all live on very different planets for none of these sensations I felt when looking at this photograph.

On the other hand, the daunting task of having to consider 101'000 contributions by 5847 photographers has surely played an important role in selecting this image. Since the pictures taken in places of turmoil are often very similar, the judges were very probably influenced by Pietro Masturzo's very original approach: to photograph protesting women on rooftops was a clever idea that nobody else had. The question however is whether this photo works - does it make the protest visible, that is? In my view it does not - the women are too far away, way too much is left to my imagination. But this image surely made us ponder what press photos should be all about. And that is no small feat, I'd say.