My first reaction to this book was that I felt irresistibly drawn to its cover, I simply couldn't take my eyes off this girl. It took me quite some time to realise that the author's name had been put next to the girl's face - not exactly a thoughtful approach, I'd say. For Susie Linfield did not take this photograph, it was taken by an unknown photographer at the Tuol Sleng torture center and shows an unidentified child prisoner of the Khmer Rouge, photographed before execution, the date is unknown. I can't recall another photo (except the one of Kim Phuc) that left me so deeply moved. To me, this photograph is the best argument against critics who hold that we have become so numbed by the floods of images from war zones that they have lost the power to move us. 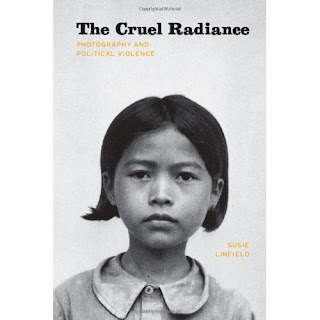 Susie Linfield, director of the cultural reporting and criticism programme at New York University, begins her beautifully written book with "A little history of photography, or, why do photography critics hate photography?" What does she mean by that? "It's hard to resist the thought that a very large number of photography critics - including the most influential ones - don't really like photographs, or the act of looking at them, at all."

There is no doubt that photographs, first and foremost, trigger emotions yet when reading the works of, say, Susan Sontag, Walter Benjamin or Siegfried Kracauer we learn hardly anything about their emotions. "Photographs, Kracauer insisted, fight contemplation; even if the new photojournalism was practised by thoughtful people, or political radicals, or intellectuals - which it sometimes was - it did not appeal to the intellect, and was therefore highly suspect." That, to me, was a real eye-opener. Never before had it been clearer to me why photo critics (with the notable exception of John Szarkowski and John Berger) have mostly left me cold - they fear emotions, they prefer to ponder stuff that has not much to do with photos (that are merely used as illustrations). It also dawned on me why the historians and art historians who write about photography have never appealed to me - their texts mostly do not need photographs to look at.

Most critics, Linfield argues, "have made it easy for us to deconstruct images but almost impossible to see them; they have crippled our capacity to grasp what John Berger called 'the thereness of the world.' And it is just that - the texture, the fullness of the world outside ourselves - into which we need to delve. Photographs can help us do that." I couldn't agree more.

Moreover, photography "was the great democratic medium" (anybody can take good photos) and thus it "could stir intense anxieties" - and it did, and very probably still does, for what "experts" fear the most is that their field of expertise all of a sudden ceases to exist. If interpreting photographs were about sharing emotions, where would that leave the context-specialists? They would have to give way to writers like Susie Linfied who commented on a photo by Teun Voeten that "shows a girl who, the caption told us, is named Memuna Mansarah. She was then three years old and was living in a refugee camp in Freetown. Memuna has plump cheeks, short fuzzy hair, and large, lively black eyes. She wears a clean, frilly, sleeveless white dress that contrasts sharply, and quite beautifully, with her deep-black skin; her left ear sports a shiny little earring. Memuna clutches a large piece of soft bread in her tiny left hand with its tiny, perfect fingernails. Her right arm has been hacked off just above the elbow by her compatriots in the so-called Revolutionary United Front (RUF). What should have been her plump, smooth arm is now a short, shocking stump. Memuna's expression is not entirely easy to discern (...) I have looked at Memuna's photograph many times, thought about it, described it to friends, and now I'm writing about it; but I'm not at all sure how to do these things, much less how to do them right. My thoughts and feelings about this photograph have changed in various ways over time, but the more that happens, the more an underlying desolation - my helplessness before Memuna - becomes ever harder to escape."

That, to me, is how photographs ought to be described for I'm interested in what the photograph is doing to the observer, I want to learn what (s)he sees, thinks, and feels when in the process of looking.


In the second chapter ("photojournalism and human rights") I came across another eye-opener (there are many more in this tome and I won't of course mention them all): "Officials in Stalin's prisons, and Pol Pot's too, photographed some of their prisoners before they were executed; in both instances, meticulous records were kept. These photographs are among the most important, and worst, documents of the twentieth century. And while these prison pictures are not, obviously, examples of typical photojournalism, they reveal the great strengths and weaknesses of photographs of suffering. They were taken by perpetrators, yet they speak for the victims and are on the side of the victims. They sabotage their own intent; they are scalding self-accusations; they twist in upon themselves. But they also epitomize, in especially cruel ways, the inability of photographs to save the people they depict."

Part two ("places") deals with Holocaust photographs ("Primo Levi got it right far more than Susan Sontag. It is not that the dead have nothing to tell us, show us, teach us; it is that we have trouble listening, seeing, learning."), the visual documentation of China's Cultural Revolution, the photographic record of the eleven-year civil war in Sierra Leone, and with "Abu Ghraib and the Jihad". Errol Morris has argued that "... all alone ... shorn of context, without captions - a photograph is neither true nor false ...". I must admit that I used to believe just that but Linfield taught me otherwise: "Yet the Abu Ghraib prove just the opposite", she writes for "as Gourevitch admits, 'Without the photographs there would have been no scandal.' And this is because people know - even after forty years of postmodern theory and two decades of Photoshop - that photographs record something that happened." And that, of course, tells us also something about the relevance of postmodern theory.

Part three ("people") portrays Robert Capa, James Nachtwey, and Gilles Peress, who, Linfield claims, could understand "that a photograph is objective and subjective, found and made, dead and alive, withholding and revealing." Indeed. And this is precisely why photography interests me: it teaches me not only to look at the world with different eyes, it teaches me something about life.

This book is far more than an eloquent and convincing tome on photography and political violence (yes, of course, it is that too) for Susie Linfield not only gives us an informed view on what she sees, she also tells us what she felt when looking at photographs. In so doing she lets us take part in her personal process of seeing. And this, in essence, is an invitation to share her experience. In texts on photography, that is not only rare, that is pretty unique, I'd say. And what's more: it is helpful.

Susie Linfield
The Cruel Radiance
Photography and Political Violence
The University of Chicago Press, Chicago and London 2010
Posted by Hans Durrer at 00:01