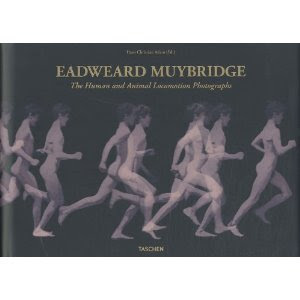 While studying for a postgraduate degree at the School for Journalism, Media and Cultural Studies in Cardiff, I attended a modul called "Unterstanding Pictures" by Daniel Meadows, a lecturer, who despite many years of teaching, hadn't lost his infectious enthusiasm: he got me hooked on photography. One of the photographers Daniel was talking about was Eadweard Muybridge, born 1830 in Kingston-upon-Thames, who, in 1855, moved to the American West Coast. With the influential Californian Leland Stanford (1824-1893), Muybridge shared a passion for horses. As editor Hans Christian Adam in his wonderfully eloquent introduction ('Muybridge and Motion Photography') penned:
"At the time, there was a vehement debate among racing aficionados as to whether, at some point, all four hooves of a galloping horse are off the ground. Many painters had depicted this, but the human eye is incapable of actually seeing the moment. Artists had taken up the subject and in some cases indulged in boundless exaggeration. 'The accepted method of drawing a galloping horse in those days (...) was to straighten out the legs fore and aft to the utmost limit, the result being that before the horse could recover his stride he would fall flat to the ground.'"

In June 1872, Stanford hired Muybridge "to take instantaneous photographs at a racecourse in Sacramento of the famous racehorse Occident, the fastest trotter in the world, and to establish whether the supposed simultaneous lifting of all four hooves off the ground did actually take place. The event was to be documented by the camera, because it was believed in the 19th century that the camera cannot lie and that a photograph, by virtue of its advanced technology, had validity as evidence. Muybridge was able to prove, after numerous attempts, by a series of photographed sequences, probably in 1872 but certainly at the latest in April 1873, that a galloping horse does indeed for an instant lift all four hooves simultaneously and lose contact with the ground."

Muybridge was not only a rather eccentric character but also a murderer. Soon after the trial that acquitted him - that he killed the lover of his wife was seen by a Californian jury as a pardonable act - he took off for a photo expedition to Panama and Guatemala. Later on he continued the motion studies in Palo Alto.

"The Human and Animal Locomotion Photographs", a heavy tome (almost 4 kilos) of 804 pages, shows 781 plates of human and animal movements - walking, trotting, running etc. - is a most impressive work that includes not only a chronology of the life and work of Eadweard Muybridge but also the criticism of the folio collection.

By the way, when looking at these photographs, I've started to understand - in quite unprecedented ways - that photographs do indeed allow us to see time, if we take the time needed to contemplate what photos show us, that is.