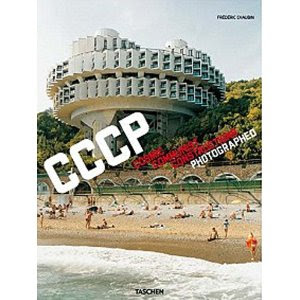 CCCP stands for Cosmic Communist Constructions Photographed and is one of the most amazing photobooks I've ever come across. Why do I say that? First of all because such Soviet buildings were totally unknown to me - I've always thought of Soviet architecture as a monotony in grey. Secondly, because many of these constructions look as if from outer space. Thirdly, because I'm stunned that Frédéric Chaubin managed to discover, and photograph them. I mean, the territory of the former Soviet Union is immense, so how did he make this fascinating tome possible? 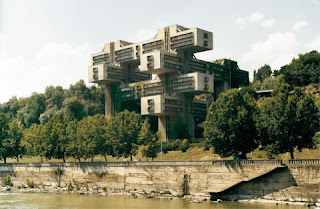 It all started with a second-hand book bought on a sidewalk in Tbilisi in August 2003 - published twenty years earlier, it surveyed seventy years of architecture in Soviet Georgia. Glancing through the pages, Chaubin felt attracted to two buildings, discovered that they were located in Tbilisi and so he went to see and photograph them.

A few months later, he met a woman in Lithuania. "Working alongside her architect husband, she had helped to build a monumental health center there in the 1970s. The construction work took ten years. The building went up in the middle of the woods, near the border with Belarus, and was made, she told me, with total freedom. A homage to the work of Gaudi, she said." Gaudi? Indeed, check out the pics of the Druskininkai spa yourself. 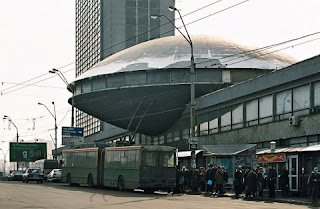 But how come such buildings were possible? Wasn't the former Soviet Union a tightly regulated bureaucracy were nothing could be done without endless permissions? Chaubin offers the following hypothesis: "the inertia of the Soviet machine, too busy putting off its own demise, let the work it commissioned on its margins float free of its control. In this sense it is surely no coincidence if most of these specimens came into existence on the fringes - the Polish border, the Caucasus, or on the Black Sea." Makes sense, doesn't it? Yet Chaubin offers also a counter-hypothesis: "these projects were not ignored but actively encouraged ... Russia under Andropov suddenly grew bolder." And this equally makes sense - see also the spread of the Andropov Villa on pages 228/229.

"The fact is that in Russia the most Neanderthal conformism always coexists with the boldest avant-gardes", as Chaubin sums it up nicely. Many thanks for showing us the latter.