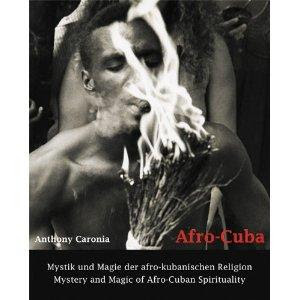 When, some years ago, I was rather often in Cuba, I from time to time got to hear about Santeria, and about Voodoo. I thought it all strange and it did not really interest me although I was aware that it (all sorts of superstition, really) played a big part in Cuban life. That however slightly changed when one of my former teachers, who I liked and respected, moved from Switzerland to Havana and started to become interested in these magical worlds. Nevertheless, my own interest remained brief and consisted mainly of reading a small booklet she had translated from Spanish into German. I did not really know what to make of it.
When coming across Anthony Caronia's AFRO-CUBA, I've decided to give it another try.
„My fascination with the African world began when I was twelve“, Caronia tells us. What this connection really is, he doesn't know. “My africanism grew stronger with the years. It started to make sense to me when, as an adult, I traveled to Brazil with a girlfriend.“ At a CANDOMBLE ceremony in Rio de Janeiro her felt immediately at home. „It was like meeting my past.“ And, he wants to do a photo book about the ORIXÁS. When however his major contact and supporter, the Brazilian historian and activist, Beatriz Nascimento, died, he abandoned the project.

With an Italian friend he goes to Cuba where he becomes a disciple. In his second year, he starts his photography work. „None of the photographs were taken withouth the ORISHA'S consent ... No secret has been revealed in this book without permission. The photographs in this book show only a fraction of what I experienced and witnessed, because many things could not be photographed. I was not only a witness of everything I have registered here as a photographer; I was also moving within the faith and had profound respect for it.“

There are great shots (all in black and white) found in this tome, and also some disturbing ones (the sacrifice of animals, for instance - „Animal blood is often used as a gift to the SANTOS and MUERTOS, either to give thanks or as a donation in order to receive what was requested“). Others are joyful and again others I've found funny – for example, the one of which the caption says: „Possessed MAYOMBERO blessing a devotee with liquor“ and that shows a guy blowing some liquid from his mouth and into the face of another guy.

Although "Cuba is the whitest of the Caribbean Islands" and "there are many white SANTEROS with black AHIJADOS", hardly any white people are shown.

It goes without saying that in order to not go nuts, we need rituals. Anthony Caronia invited us to look at some such rituals and in doing so permitted us to get a glance of a world unknown to most of us. When I put the book finally aside, I still did not know what to make of all this. Yet the words of Tzvetan Todorov, that curator and art critic Ania Rodriguez refers to in her informative and helpful introduction – „We are enriched through knowledge of others: here, giving is taking“ – are still with me. And some of the pictures too – my personal favourite you will find on page 27.