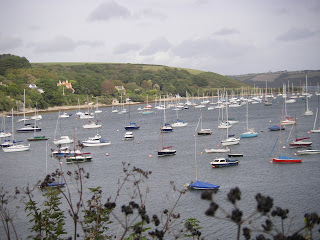 Trains from Gatwick to Reading were not running due to a tree on the tracks, passengers were advised to travel via Clapham Junction, the announcement said. It sounded like the tree would be there for quite a while.

I travelled together with a clergyman in his seventies who as a young boy felt attracted by the singing in church. To him, to say mass was a performance, and he loved it. Practising rituals does advance spirituality, he said.

The next day, in a second-hand bookstore in Falmouth, I bought Alan Bennett's „Four Stories“, my first book by this author. One of the stories happened to be about a memorial service and once again I was told that what is taking place in church is a performance: „Whatever else it is“, he had told the Board, „a congregation is first and foremost an audience. And I am the stand-up. I must win them over.“ It was so obvious that I could not stop wondering that I had never thought of it. 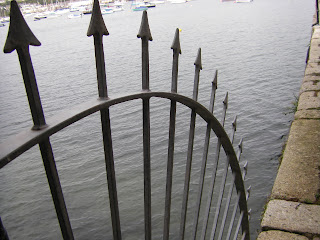 When looking for an internet-café, I was told to go to the public library. It was closed. I asked an elderly man who also had wanted to get into the library whether my hotel was in walking distance. It wasn't and he offered to give me a lift. After he and his wife dropped me off at the hotel, I found out that I had been booked into another hotel. 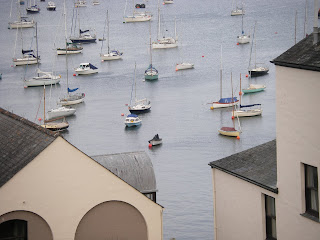 In Reading, people seemed to be from everywhere. I thought the waitress looked Finnish, I asked her whether she was. Finished? she wondered. Are you from Finland? I tried again. Poland, she said. The receptionists of my hotel were from Perú and Argentina, the people running the Thai Corner restaurant very Thai (very sweet, that is), and the English staff at Waterstones helpful but not able to come up with the book I was looking for (Janet Malcolm's "Iphigenia in Forest Hills: Anatomy of a Murder Trial").

In Guildford, the train to Gatwick filled up. A large group of young men, all sporting the same T-shirt and beer cans stormed the until then quiet wagon I was in. Are you some sort of club? I asked the guy sitting next to me. A stag party, the guy over there gets married and so we're going to a beer festival in Cologne. When's your flight? I inquired. At two ten, with Easyjet. Are you on the same flight? Fortunately not, I replied. He and his colleague grinned.