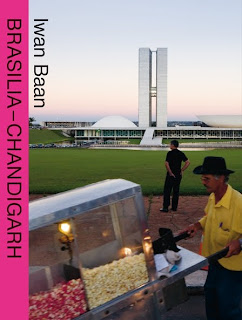 There are books I have decided to like before I have even opened them. How come? I do not really know for I haven't a clue how the unconscious works. Yet sometimes there are indicators. In the case of Iwan Baan's Brasilia - Chandigarh, Living with Modernity: the fact that Brasilia (although I've never been there, physically that is) has always fascinated me; that there is a city in India that also originated from the drawing board (that was new to me); and the fabulous idea of publishing photographs of these two sites in one tome (the book was initiated by Lars Müller). And, last but not least, I do admire the work of Niemeyer and Le Corbusier.

From Cees Noteboom (Ex Nihilo: A Tale of Two Cities) I learn that Washington and Canberra were also built from scratch as were Palmanova (in the province of Udine, at the end of the 16th century) and Sabbionetta (built between 1554 and 1571 in the province of Mantua): these were "planned cities, almost abstract places that would escape any rivalry from that which already existed, cities from which the country would be ruled."

When in Southern Brazil, in 2009, I played with the idea of visiting Brasilia but was told that since I was without a car this would not be a good idea. In the words of Noteboom: " ... walking was not the simplest way to get around, as it is in some old cities ... The scale was vast and the distances were a challenge in the heat. My own, human proportions cowered at the violence of these dimensions". What he also detected was this: "From afar, the cathedral, the National Congress Building and the Planalto Palace looked like wondrous sculptures, they had something breathtaking about them. There was something else I hadn't expected: not only the human element, but also the effect of nature. In architectural blueprints, no grass grows between the stones. The concrete shows no sign of efflorescence and rust is not part of the design. People in architectural sketches are faceless outlines ..." Right, so in photographs from real life we then would expect to see signs of efflorescence and rust, signs of life that is? Yes, we would and we do.
By the way, Noteboom's text is not least notable because it also refers to the photos found in the book – and that is rare for texts in photo books.

The town of Chandigarh lies in northwestern India. "Modern architecture was to play a key role in a fundamental transformation of traditional Indian society, and Chandigarh would serve as the stage upon which this development was set in motion", writes Martino Stierli in "Monuments to Modernity". The project was criticised already early on "for its poor adaption to the realities of everyday Indian life and to prevailing cultural conditions". Whenever I come across such arguments I feel like quoting myself: "... we are not condemned to expect from the world what our culture has told us. The culture we grow up in is not a static entity, neither is our identity fixed once and for all." (Hans Durrer: What is Intercultural Communication?) 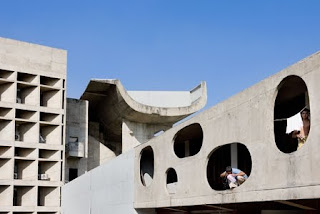 How does life in the two cities (actually: in Iwan Baan's photographs of the two cities) present itself? Do the similarities or the differences prevail? It's hard to say: one day I saw (I concentrated on) the differences (Chandigarh full of people, Brasilia almost devoid of them), the next day I saw (I concentrated on) the similarities (just a few people in both cities).

"I am most interested in portraying how people are living, thriving, or coping with Modernism today", Iwan Baan says. Did he do this? Is this visible in the photos? I'm not sure. I mean, have a look at the photo below: 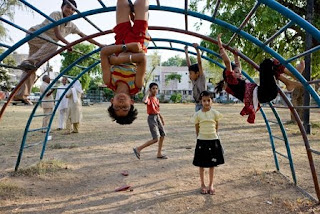 I love this pic, mainly because of how the girl in front looks into the camera. But has it anything to do with modernism? Not in my view. But what about the other pics, do some of them show "living with modernity"? In the sense that they show how people appropriate their surroundings, yes, they do.

I do not remember a photo book in which all the photos were to my liking and this tome is no exception. There are many shots that I find thoughtful and asthetically convincing but there are also others that made me wonder why they were chosen. Nevertheless, I had an inspiring time with "Brasilia - Chandigarh" – it made me want to visit these two cities. Iwan Baan
Brasilia - Chandigarh
Living with Modernity
Lars Müller Publishers 2010
Posted by Hans Durrer at 00:01