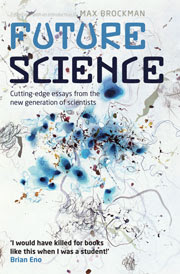 As "cutting-edge essays from the new generation of scientists" advertises Oxford University Press this collection from neuroscience and evolutionary psychology to plant populations and oceanography.

"I would have killed for books like this when I was a student", Brian Eno is quoted on the cover. Well, I wouldn't have. Nevertheless, I do find Future Science an inspiring work. Mainly, because I've learned stuff that was completely new to me.

Here are some examples:
"Despite considerable evidence to the contrary, Earth was not a particularly good place for life to arise. The main ingredients for life as we know it are a lot easier to find farther out in the Solar System." (Kevin P. Hand: On the Coming Age of Ocean Exploration).

"Children are intention readers, not just behavior copiers (...) Altruistic behaviors do not appear to be solely the outcome of cultural norms and socialization. No doubt socialization practices profoundly influence children's development and cultural norms can facilitate and sustain whatever is jump-started by biological inheritance. Despite altruism's early emergence, children have a lot to learn about how and whom to help. For example, we should not blindly help everyone (such as those with bad intentions); it is essential that we learn when to help and when not to help." (Felix Warneken: Children's Helping Hands).

"Science has recently called into question the old adage that beauty is in the eye of the beholder. What makes a person attractive may not be solely a matter of individual taste or a particular culture but instead may reflect evolved preferences - predilections handed down from our prehistoric ancestors. Isolated and evolutionary relevant groups such as hunter-gatherers may hold the key to important questions underlying the origins of attractiveness." (Coren Apicella: On the Universality of Attractiveness).

"Piaget's great gift was to find cases in which children make judgements that are strikingly different from those of adults, and his study of moral judgement is no exception (...) Young children tend to focus on causal responsibility, while older children and adults tend to focus on intent." (Fiery Cushman: Should the Law Depend on Luck?)

The Economist rightly remarked that "the essays are of uneven quality. A few of the contributors seem to be born writers, but a couple seem happier to stick with the jargon and densely packed prose that plagues most papers in scientific journals."

Still, Future Science is a fascinating read, although I'm not sure whether, say, evolutionary psychology, is really a science and not just a theory.

Future Science
Essays from the Cutting Edge
Edited and with a preface by Max Brockman
Oxford University Press, 2011
Posted by Hans Durrer at 00:01