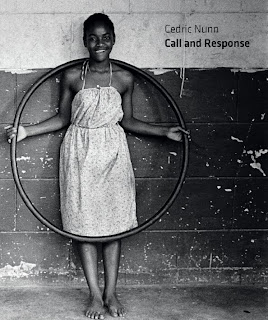 Since the end of the 1970s, Cedric Nunn's photographic work has focused on people from his homeland, South Africa, I read in the preface by Ralf-P. Seippel - and briefly wondered what the P. might stand for. Anyway, having worked as an ICRC-delegate in KwaZulu-Natal in 1994/1995, this tome aroused my special interest.

"In photography", writes Cedric Nunn, " I saw a medium that would allow me to express myself in relation to various issues that I was becoming aware of. The most obvious was the extent of the racial division and exploitation to which we blacks were subjected. I was particularly struck by the racism in my own mixed-race community and sought to understand this and why it was that mixed-race people were so prone to alcoholism, unemployment, broken marriages, teenage pregnancy, and other social ills. Very quickly I learned that these issues had a national character and that the remedy for them was indeed a national one. I remember a discussion with my father in which I vented my frustration at the state of the nation. His quiet response was: 'Do something about it.' These photographs, which span a thirty-year journey in photography, are in a sense my answer to that challenge." 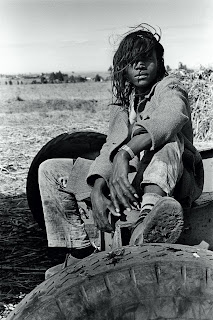 Although I think many of the photographs in this tome excellent, I fail to see how they could possibly give answers to questions "on alcoholism, unemployment, broken marriages, teenage pregnancy, and other social ills." So what do Nunn's photographs then do? In my view, they illustrate carefully chosen aspects of life in Southern Africa, they show me a wide variety of often impressive scenes that document a social reality that we need to confront in order to change it. Lewis Hine came to mind, who "sought to apply to documentary photography: 'to show things that had to be corrected' as well as 'things to be appreciated'", as Andries Walter Oliphant points out in his essay "Writing with Light: Textures of Life in the Early Photography of Cedric Nunn". 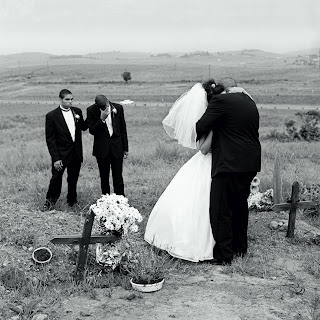 "... what made you feel confident that photography was your metier?", asks Okwui Enwezor, and Nunn replies: "It was the incredible powerful feeling I had, it certainly wasn't any intellectual sense that I could master this medium (...) the medium called me, and I was on a journey to produce images that people like Omar Badsha and David Goldblatt were producing. Later I met Santu Mofokeng, Guy Tillim, and others. I was in awe of them and wanted the kind of ability that they have." 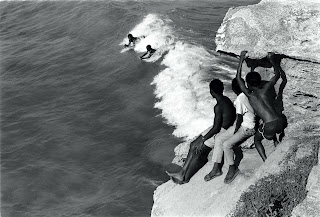 The caption of the pic above reads: "Children from Arniston or Waenhuiskrans surfing off the Western Cape coast. Frequent missile testing at a nearby military base prevented fishermen from their village going out on boats to earn a living." This photo and caption illustrate (although I doubt that this was intended) what the problem with social documentary is: the picture cannot show what it is supposed to show; we need to bring to the picture what is not there in order to see what the photographer wanted to show us.