When, a few days ago, it was announced that Massoud Hossaini got the Pulitzer-Prize in the category Breaking News Photography, I clicked through the sequence of photographs that were displayed on the website of the Süddeutsche Zeitung.

The second photo in the series, the one for which Massoud Hossaini received the Pulitzer, showed Tarana Akbari, 12, amidst dead bodies, screaming in fear moments after a suicide bomber detonated a bomb in a crowd at the Abul Fazel Shrine in Kabul on 6 December 2011. 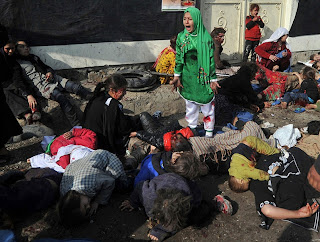 
The next photo showed the photographer upon learning that he had won the Pulitzer.


The next couple of days, on various internet sites, I again and again came across the picture of the screaming girl in green – and always the pic of the happy photographer came to mind, although I had seen the photo of him only once.

I do not know what the picture editor of the Süddeutsche Zeitung had in mind when he placed the photograph of the happy photographer next to the one of the screaming Tarana Akbari, but probably not much. In any case, the effect this, in my view, totally insensitive positioning had on me was devastating. It made me once again aware that to shoot disturbing and necessary pictures is a career, a business, a way to make a living. Maybe the picture editor of the Süddeutsche Zeitung wanted to show us precisely that. If so, he should also receive an award.
Posted by Hans Durrer at 00:01