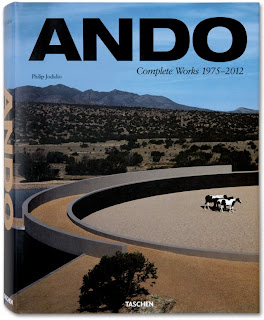 Tadao Ando, I learn from the book jacket, is the only architect to have won the discipline's four most prestigious prizes: the Pritzker, Carlsberg, Premium Imperiale, and Kyoto Prize. He has designed award-winning private homes, churches, museums, apartment complexes, and cultural spaces throughout Japan, and in France, Italy, Spain, and the USA. This book brings together his complete works to date. 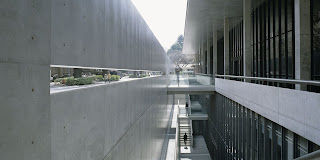 Among the private homes that Ando built is the studio and private residence of the Fashion designer Karl Lagerfeld in Biarritz. It is divided into a private residence, and a guest area and atelier; a pond is set between the two elements. What we get to see, however, is not the real building but the design. "The Invisible House" is another private residence by Ando, it is located in Treviso, Northern Italy. Ando explains: "The only request presented by the client was the total protection of privacy, from adjacent streets as well as from the perimeter of the site. I have explored the image of a house connected to mother earth and responding to the surrounding environment, in keeping at maximum with his modest wish, and have come up with the idea of an 'invisble house' half buried underground." Fortunately, this time we get to see not only the (from the outside) visible part of the house but also photos of the interior. 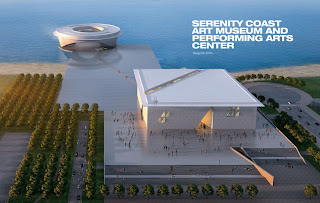 I have virtually no knowledge of architecture and thought it rather peculiar to be told (from the introduction by Philip Jodidio, a former Editor-in-Chief of the French art journal 'Connaissance des Arts') that Ando, who was born in Osaka in 1941, "was self-educated as an architect, largely through travels in the United States, Europe, and Africa (1962-1969)." I still do not know how exactly he did do that and, unfortunately, the book doesn't really give an answer. Anyway, his works are unique and truly stunning, and the fact that he was self-taught might have quite a bit to do with that.

In what way do I consider Ando's buildings unique and stunning? It has to do with his handling of space that I find very Japanese – cleverly organised, that is. Words that come to mind: pure, simple, unadorned, geometric but varied.

Moreover, Ando is a true master when it comes to combining the old and new. The renovation of the Punta della Dogana in Venice illustrates this perfectly: his subtle intervention (an example: brick walls that contrast perfectly with an elegant steel-and-glass stairway) makes one sense a very modern atmosphere in this old (a 15th-century old structure renovated in the second half of the 17th century) building.

PS: As interesting and fascinating as the designs are, the photographs of the finished constructions are simply fabulous and merit alone the acquisition of this beautifully done tome.