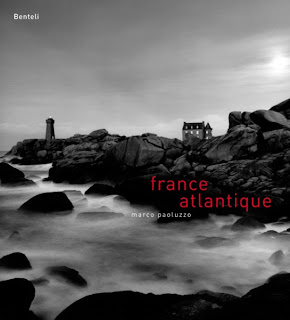 I've never visited the French Atlantic Coast but have always been fascinated by it. Deauville comes to mind, because of a novel by Marguerite Duras, and the beach scenes in the movie that was based on Philippe Djian's 37.2 le matin, and Biarritz, and Capbreton (probably because both sound good in my ears) – some impressive pics of these two places can be found in this nicely done tome.

The photographs are in black and white and most of them are devoid of people, thus emanating a somewhat eerie and strangely unreal atmosphere. It's of course to do with the light but not only. The more time I spent with these pics, the more I felt intrigued by the angles that Marco Paoluzzo decided to choose – it is the framing that make these images so special. Take for example the pic on pages 82 and 83 that shows the rugged Cõtes d'Armor of Locquémeau taken in 2011. One can see two high man-made poles "polluting" this wild and seemingly untouched part of the coast and I suppose most photographers would have chosen an angle that would have avoided having them in the pciture ... but it is precisely these two poles that my eyes constantly return to and that make me perceive this coast in most unexpected ways. Needless to say, I have no idea whether Marco Paoluzzo had in mind what I'm reading into this picture yet this is the fate of all photographs: they become independent of the photographer: once out there, the readers do with them whatever they please.

Marco Paoluzzo's France Atlantique is introduced by Pierre Rouyer who writes: "Sand, pebbles, dunes, cliffs, estuaries, the rhythmic beat of the backwash, the coming and going of the tides, the piercing cries of the birds as they sweep into the sea spray. And on the fringe of this wild grandeur, man's ever-growing presence is signalled by the abundance of roads and built-up places. When you arrive at the seashore from inland, you first see a landscape of harbour cities, seaside resorts and silent towns. Yet the sprawling mass of saltwater is very close. You can make it out when you look at the sky. Something in the shapes and movements of the clouds and a certain brilliance of the light herald the end of terra firma."

I find this a perceptive, thoughtful and very apt introduction to Paoluzzi's Atlantic pictures for it helps me, by giving my mind contemplative directions, to see them once again anew.