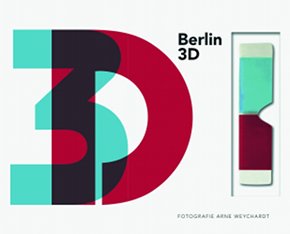 The problem with book reviews is that once through with the book you are left with images and impressions, some favourable, some less so, that you now have to find words for. Sometimes, and that goes especially for photo books, you do not know what to say except that you like a tome or that you don't. In the case of Arne Weychardt's Berlin 3D: I like it. My favourite pic is the Living Doll mime artist at Checkpoint Charly.

What do I like about Berlin 3D? Well, this is the first time I look at photographs of Berlin in 3D, and that of course makes this tome special to me. Also, I do like looking at places I know through another person's eyes, and thus getting out of the prison of my own thoughts.

Berlin 3D is not really a book that lends itself to reviewing. In my view (yes, I know, a rationalisation is needed) it makes more sense to introduce it. And the best way to do that is to quote from "A declaration of love" by Dagmar Weychardt, the cousin of the photographer. She writes:

"In 1980 Arne Weychardt spent the Easter holiday at his grand-mother's old house with his brother and cousin. Up in the attic, they discovered a strange spectacle-like viewing device consisting of two close-up lenses with two 8x8cm slides set in front of them. The distance between the slides and lenses could be adjusted. Curious, 13-year old Arne put the antique device on his nose. After a few seconds, flooded by the shimmering light of the early spring sun, the hand-coloured slides were magically transformed. Ancient gates, columns, walls and sculptures were suddenly filled with texture and thrown into relief. The boy recognized the ancient Forum Romanum. Little by little, more monuments stood out from each other and the longer he looked at the image through the thick lenses, the more powerful the effect became."

Feel like sharing Arne's sensations? Put on the 3D glasses included with this book and enjoy looking at Berlin with changed eyes!