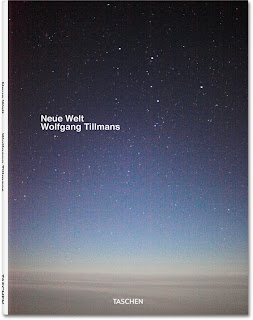 Leafing through this book, I very rarely felt attracted by what my eyes showed me, most pics didn't make me curious either, and I wondered why Wolfgang Tillmans is considered an outstanding photographer. At the same time I didn't wonder about it for many pics of famous photographers do not mean much to me. Still, there were of course some in Neue Welt that I did like.

On the other hand, the more background information I'm given, the more chances I have to understand what I'm looking at. And the interesting introduction to this book – a conversation between Wolfgang Tillmans and Beatrix Ruf  – provides just that: lots of useful background info. 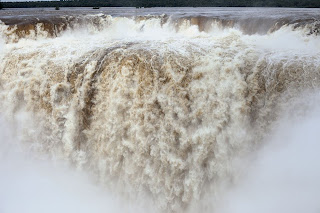 I very much liked the pic ot the Iguazu Falls ... because I've been there, and hadn't seen them from so close. When I first looked at the pic I kinda liked it (and hadn't a clue why that was: it simply pleased my eyes) but didn't really know what I was looking at. Learning what I was having in front of me changed, and directed, my feelings towards this pic.

Beatrix Ruf asks: "The attention to detail in digital pictures no longer corresponds to our everyday seeing experience, unless one consciously changes to extreme focusing. In your new photographs, one continously encounters this extreme perceptual density, for example, in the picture of the waterfall (Iguazu, 2010), where even the smallest spray of water surprises with its staggering resolution, or when microstructures become large-format images." Wolfgang Tillmans answers: "This question deeply preoccupies me, now more than ever since I switched to the digital camera. It enables pictures to be taken with an almost endless information density, which only reveals all its details when enlarged to two meters. Even then, one doesn't see pixels! I had to learn from scratch how to take pictures. Thirty-five millimeter film is actually enough for me, since it corresponds to what my eye actually sees." 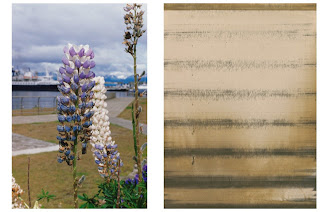 Some of the pics (the two above, for instance), I thought, anybody could have taken but, and that is the point, who would have put them together like this?

And then there are the double-pages with layered images and overlaps. Tllmans elaborates: "These layered images, the impure, the contaminated, and that which isn't compatible but which functions just the same, were present in my work from the start ... Now my perception of the world has found its form."

PS: Wolfgang Tillmans traveled quite a bit in order to shoot these pictures. "There is less of a system to my traveling. It has more to do with possible flight routes. What lies over there? What could be connected to that. That's how I landed in unheard of spots like Darwin in North Australia." I very much like this approach (although I thought the German translation of "unheard of spots like Darwin" – "Unorten wie Darwin" – not only awkward but incomprehensible), the result – the pictures – I however thought less convincing.