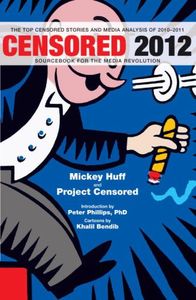 "Most journalists in the United States believe the press here is free. That grand illusion only helps obscure the fact that, by and large, the US corporate press does not report what's really going on, while tuning out, or laughing off, all those who try to do just that", Mark Crispin Miller is quoted on the back cover. In other words, if you really want to know what is going on in the (US media) world you are well-advised to spend time with Censored 2012.

Needless to say, critiques of the establishment press also come from well-established institutions such as Harvard, Columbia or the Annenberg Schools yet, in the words of Mickey Huff, "neither go so far as to critique the overarching structure within which the media they critique actually operate – that of capitalism and the private, for-profit model for journalism in a supposedly free and egalitarian society." Horst Herold, the former head of the foreign intelligence agency of Germany, comes to mind: he once said that there is no democracy in capitalism for capitalism is governed by money and not by the people.

How come that, in Mickey Huff's words, the "major institutions all miss a big piece of the puzzle that has also contributed to the collapse of modern journalism"? Because, according to Huff, of "the reliance on establishment sources and exclusion of vernacular news."

Of the top censored stories of 2010-2011, Censored lists as number one: "More US Soldiers Committed Suicide than Died in Combat". Although post-traumatic stress disorder is widely covered in the corporate media, the focus is on the soldiers themselves and "never questions the US policy of maintaining a military empire of occupations and wars worldwide", I read and find this hardly surprising for the corporate media's role is not to question the fundamentals of power politics but to promote them.

Since I'm a fan of Jacques Ellul's Propaganda: The Formation of Men Attitudes I was especially keen on Jacob Van Vleet's piece on his analysis in section two. I do not know where Van Vleet has his information from but to say that Ellul was a sociologist and professor of the History and Sociology of Institutions at the University of Bordeaux seems at least questionable. According to http://www.ellul.org/bio_e1.html, Ellul was a professor of Roman Law. Anyway, Van Vleet's piece is informative and worth reading (especially because of the various up-to-date examples that he provides) although I do not share his conclusion that "only knowledge of the various forms and methods of propaganda can free us from the layers of persuasion with which we are faced on a daily basis." I do not think that such knowledge can free us and believe at the same time that such knowledge is helpful. A contradiction? Of course? Real life is full of them!

Konrad Kellen wrote in the introduction to Propaganda: The Formation of Men's Attitudes that Ellul designated "intellectuals as virtually the most vulnerable of all to modern propaganda, for three reasons: (1) they absorb the largest amount of second-hand, unverifiable information; (2) they feel a compelling need to have an opinion on every important issue of our time, and thus easily succumb to opinions offered to them by propaganda on all such indigestible pieces of information; (3) they consider themselves capable of 'judging for themselves'."

So, what is there to do? "... to become self-informed, radically democratic and culturally resistent to the empire of destruction", as Peter Phillips writes in the "Introduction to Censored 2012."