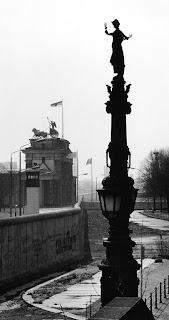 When approaching a book, I usually start with the introduction. In the case of Barbara Klemm's Fall of the Wall 1989 I would however advise to skip the intro and go directly to the photos.
It is the very first pic in this convincing work that did it for me, that made my senses connect to what the image showed: Border Fortification, Bernauer Strasse, Berlin 1971, the caption reads. It is a black and white photograph that might have been taken in November, fog and mist cloud the lifeless scene, the dominant colour is grey, the street lamps stand in line as if they were soldiers at a military parade.

But why skip the info? Well, let me give you the first paragraph and then you will probably understand:
"A charge that cultural critics level at producers and mediators is that their images convey information that deliberately blurs the boundary between being and appearance, encouraging viewers to form ideas about the world that are far removed from the realities of life. The history of photojournalism contains many an instance where the technological miracle that is the snapshot served to disseminate manipulative and distorted visual information. The children and grandchildren of photography – print media, television, and the internet – have made the bad reputation of photojournalism and photo reportage worse by promoting the circulation of images that were neither true to reality nor had any artistic value that justified their existence beyond the day they were published."

In case you don't understand why I think that this is, well, to put it mildly, not worth my time: "blurs the boundary between being and appearance"?! I mean, that is what photography is all about. The "bad reputation of photojournalism and photo reportage"? I've never been aware of such a bad reputation and do not think at all that it is true. Anyway, I prefer to experience the effect Klemm's photographs have on me. The first sensation that I'm conscious of is that I like to look at them. They do not bore me. Quite the contrary, they make me feel curious. And, I say this with a certain wonder, I'm suprised that it is like that for the topics photographed do not strike me as out of the ordinary: remnants of the wall, the Brandenburg Gate, Wall Tourism in 1990, Kohl and Genscher waving, a youngster on a bike in Berlin-Kreuzberg. What is it that these black and white pics (and the fact that they are in black and white certainly constributes to it) radiate something magical, something surreal. No idea, really, but as strange as it seems: there is an aura of timelessness about these documents that capture moments in time that happened only then and there.

I was in Berlin on the day the wall fell, I have written about it. I did not see what Barbara Klemm decided to record and it doesn't cease to amaze me that one can be at the same event and experience it so differently. And, I do of course know that much of what I see in these photographs I do bring to them. I know for instance a bit about the two German states, I have been to Berlin before, once to the Eastern part, quite often to the Western part. Yet Barbara Klemm makes me see a fall of the wall that is somehow new to me.

Looking at these photographs feels like watching a movie ... but with a difference ... for I can decide how long to stay with a certain pic. At this very moment: With a shot that shows Egon Krenz in front of Altes Museum. At first glance (when I concentrate on Krenz and the people behind him), there is nothing notable about this picture but the more time I spend with it the more I begin to see (I concentrate now on the statue I see in the back, almost on the same line as Krenz) that this is a truly remarkable composition. And, there are lots of such convincing compositions in Barbara Klemm's Fall of the Wall 1989.

www.nimbusbooks.ch
Posted by Hans Durrer at 00:01