Roger Grenier: A Box of Photographs 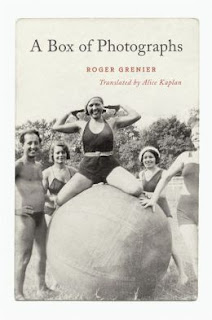 "But doesn't photography really begin with the first child who saw the sky, the trees, the prairies reflected in a drop of water? (...) Fixing the image afterwards was merely a chemical detail."

Thoughts like these make this book a revelation to me. And such wonderful observations from the early days of photography: "Anyone who owned a store had his picture taken in front of it."

Roger Grenier's relation to photography started with his parents. They were opticians, and opticians at that time often added a photo-printing service to their main business. However, they, and particularly the mother, were not happy with the service for their clients asked too many questions, "they wanted to know why their pictures didn't turn out, were too dark, were too light." Nevertheless, young Roger acquired enough know-how from his father to work in a photo lab for a whole summer vacation.

A Box of Photographs is a memoir in brief chapters that revolve around photos. There was for instance the lieutenant who went mad and couldn't stop taking pictures: "We had the impression he was never going to stop, and we decided there must not be any film in his camera." Then there's the story of the precious photo of the train station at Tarbes that he cannot find anymore. And, his photographing paintings. And ...

In December 1940, still a soldier, he ended up in a regiment in Marseilles and sent to serve in Algeria. "The photos from North Africa immortalize scenes so incongruous that without these paper witnesses I would have forgotten them." Here's an cxample that has stayed with me: "The swamp water that was filtered through a handkerchief, for drinking."

Skiing on the Sancy, at Mont-Dore, he fell on his Voigtländer, which he was wearing around his neck. In Saint-Petersburg, getting out of a little boat after an outing on the Neva, he fell again on a camera. And, in August 1944, when the Germans were firing on people in Paris, he took photos, was stopped and searched, and the camera was taken from him. Grenier dryly comments: "They threw my Voigtländer in the gun turret of a tank. It was a return-to sender, actually, since this camera is German-made."

A Box of Photographs is a thoroughly enjoyable book. On its back you can read praise for another of his works, The Difficulty of Being a Dog. Interestingly enough, the very same praise would also be fitting for A Box of Photographs: "Utterly charming and irresistibly quotable", for instance. Or: "An alluring book full of philosophical and literary musings". Or: "Literate, light and lighthearted ..."

Roger Grenier
A Box of Photographs
The University of Chicago Press, Chicago 2013
Posted by Hans Durrer at 00:01