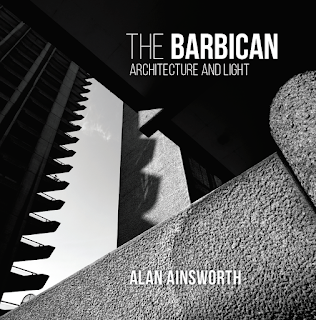 To photograph means, literally, to paint or to draw with light. I must admit that I've never really understood what that means for I've always thought that one paints with a brush or that one draws with a pencil - but with light?

However, contemplating Alan Ainsworth's photographs sort of modified my point of view. His photographs, apart from being thoughtfully composed, make you aware that it is the light that makes us see what we are seeing.

The photographs in this work do not really show „The Barbican“, they show selected parts of the buildings. In other words, the sensations that I experienced while spending time with these photos were not chiefly related to the construction as a whole but to certain, carefully chosen, aspects that showed me how fascinating, intriguing, even mysterious, parts of buildings can look. 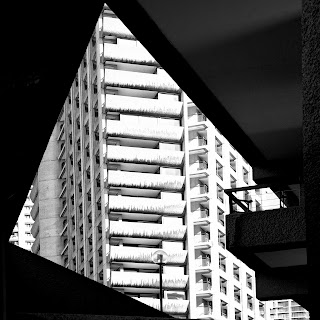 Alan Ainsworth is not only an accomplished picture-taker but also a gifted man of words. It does not happen often that I come across a photographer who knows so eloquently to put into words what he sees. „The multiplicity of lines and shapes, both positive and negative, which catch and channel light in different ways in the Barbican is remarkable. Straight lines run horizontally, diagonally up staircases and vertically, counterposed in many cases by the jagged line of the edges of the towers. As these multiple shapes combine with the different shadow shapes which move slowly across the built landscape, a series of geometrical patterns emerge. Shadows form of different planes and the effect of this gradually-changing cubist collage can be mesmerising. The round globe lighting fixtures counteract the lines of the buildings and, when caught in the sunlight against shadow, seem like glowing bulbs. Plate glass windows create reflections of light and shapes and multiple the criss-cross patterns from the buildings.“

For the full review, go to http://www.fstopmagazine.com/
Posted by Hans Durrer at 00:01