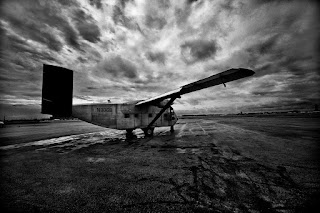 Skyvan PA-51, one of the five planes of the Argentine Naval Prefecture used for death flights during the 1976-1983 military dictatorship. The aircraft operated the flight on 14 December 1977. Fort Lauderdale, Florida, United States, 2013.

Destino Final is an impressive, and deeply moving, document and that has mainly to do with the ingenuity of photographer Giancarlo Ceraudo. Let me elaborate: Photographs, generally speaking, capture the moment and, as the saying goes, bring time to a standstill. In other words, photography is about recording the present. So how do you go about a photographic project that aims at recording occurrences that happened before your time?

My review you will find on http://www.fstopmagazine.com/
Posted by Hans Durrer at 00:01