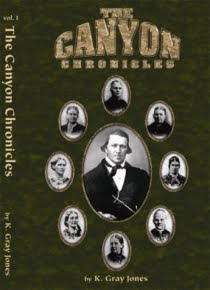 "The Canyon Chronicles" happen to take place from 1845 to the beginning of the 20th century and "tell the story of the Gentile Nicholsons, the Mexican miner Juan Alicante and his son, and their long-running feud with the Mormon Apostle Ephraim Taylor, his son Ezra, and other assorted 'prophets' and Danite assassins." Since I'm not really into historical novels, I'm probably not the right person to review this tome - and so I don't. Instead, I will convey a few impressions.

It was the dedication that made me curious: "This book is dedicated to the indomitable spirit of Ann Eliza Young, who fled the Utah Territory in 1873, escaping from the clutches of her polygamous husband to write 'Wife Number Nineteen,' narrating her years of bondage as one of the multiple wives of Brigham Young." What made me even more curious was an excerpt of Young's Journal of Discourse from 1856 that said "Suppose you found your brother in bed with your wife, and put a javelin through both of them, you would be justified, and they would atone for their sins, and be received in the kingdom of God. I would at once do so in such a case, and under such circumstances."
How come this made me curious? Well, I expected the book to teach me quite a bit about this religion that advocated such practice, and why, yet it did not, at least not on the first hundred pages or so ...

Although I felt slightly disappointed (for I would have liked to learn how somebody justifies polygamy ... well, come to think of it, maybe not), I thought it a well-written text that occasionally provided a glimpse into the thinking of the leaders of the Church of Latter Day Saints: "Iron mining was allowed, because things could be fashioned from that metal that were beneficial to the visions of the Prophet and his apostles."

Being Swiss-German myself, I thought it particularly interesting to come across Johann Augustus Sutter, the pretty ruthless Swiss-German business man (sometimes referred to as German and sometimes as Swiss-German - editor, please note: the two are not interchangeable) that I so far only had known as a fabled gold digger: "Sutter was making a fortune off the miners and used his considerable influence to maintain his riparian holdings. His greed, however, knew no bounds, and he insisted that his cut from the works along the stream be 70 percent."

"K. Gray Jones is in the forefront with the best writers alive today in his ability to capture the essence of a heart-rending situation, a tense confrontation, and the description of a scene, whether it be a shootout in the streets of Salt Lake City, the dining salon of a 19th Century Western Hotel, or a wild canyon," Penelope Leight is quoted on the back cover. I readily admit that I have no idea whether K. Gray Jones belongs "in the forefront of the best ...," but he surely knows how to render tense confrontations. Here's an example:

"Something was definitely not right. Now, thoroughly sobered by the sense of impending danger, David pushed away from Rachel and stood up in the loft. The ladder creaked and he felt something rough and abrasive wrap around his ankles. It was a rope, and someone jerked on it. His feet were yanked out from under him and he slammed down on his back on the platform of the loft, clutching at straw. There was another jerk, wrenching him out of the loft and into dark space surrounded by beams. He thumped onto his back on the dirt floor of the barn. Rachel screamed ..."

To the extent that this is true history, I think the book is great. It seems to be very well presented. I learned from personal genealogical research that women had a pretty rough time back around 1874. I would want to be sure this book was true history in order to understand the ample social, legal, and religious contexts this book presents.