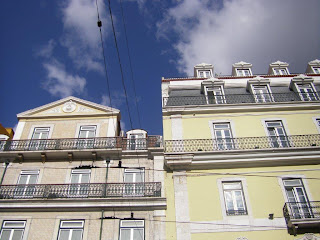 Ten days ago, my flight from Faro to Geneva, due to volcanic ash, did not take off. The next Easyjet flight leaves a week from now, the lady at the airport counter told me and added that I would have more options in Lisbon - and so I took the next train and spent some unplanned days in the Portuguese capital, a stunningly beautiful city although pretty much in decay, as a German tourist aptly described it. This has to do with our bureaucracy, the receptionist of my hotel said: you need permissions for everything. 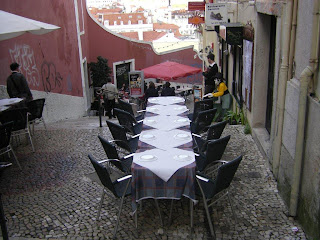 Hotel breakfasts are served from 7.30 hrs to 10.00 hrs. I thought this rather late and asked how they accommodated business people who surely had to start work early. Well, offices open at 9.00, I learned, dinner is between 21.00 and 22.00, and prime time televison starts at 22.30 hrs. 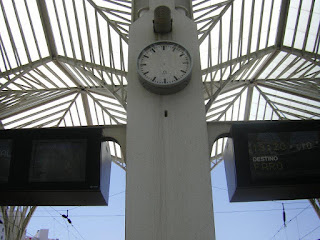 Most of my time I spent wandering around town and sitting in pastelarias drinking café com leite while observing people coming and going. Two scenes I remember particularly well:

A guy, in suit and tie, in his fifties or sixties, who upon entering immediately demanded loudly a brandy, waited impatiently at the bar, got it, and gulped it down - then he was ready for church (it was across the street and I saw him heading for the door).
A young man, dressed in a sports jacket, waited in a sandwich place until the employee preparing a fruit juice turned around, then took an orange from the pile and left while several people, including me, were watching him. When a young woman let the employee know what had just happened, he just shrugged.

There must be a nest of Africans near the Praça Rossio because at one end of the square lots of them are hanging out; the few women among them, some in wonderfully colourful dresses, are sitting on cardboards under trees chatting.

In Albufeira I spoke to an African who grew up in Zimbabwe until he was 18, from 18 to 30 he lived in London and for the last three years he was residing in the Algarve. Why the Algarve? It is the closest to Africa without physically being there, he explained: the trees are the same, and the flowers, and the blue sky; also, things usually take a lot of time and rarely work very well ... it's pretty much like in Africa but safer. Similar things I heard from a British woman who grew up in Kenya. 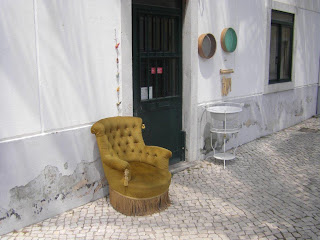 In Faro, I asked an older man for a taxi rank. He told me (in French - in the touristic South, but not in Lisbon, most of the people, when I addressed them in Portuguese, responded in English) to come with him to the house next door but the neighbour (a taxi driver) was not in.

One morning, I walked into a hairdresser's place. The place was empty, except for the woman at the reception. She showed me her schedule (that to me looked not exactly full) and said it is full today.

Later in the day, I asked a middle-aged woman for a taxi rank. You need to call a taxi, she said, do you have a cell phone? When I said no she took me to her nearby office where she asked her boss whether he could call a taxi for me. Her boss quite obviously thought this a rather peculiar question and instead showed me a taxi rank just a few meters away ...

Last but not least, in some supermarkets I found my treasured Guaraná, a soft drink I had thought would only be available in Brazil.
Posted by Hans Durrer at 08:18

lovely account of your time in Portugal. i can imagine the stories happening. . .
very nice to see you found a good alternative to being stranded because of Mr Vulcano. oh my.