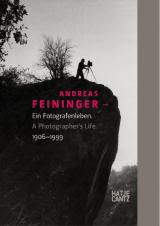 Recently, Hatje Cantz published "Andreas Feininger. A Photographer's Life, 1906-1999", a bilingual edition in English and German, with texts by Thomas Buchsteiner who introduces his work with these words:

"Andreas Feiniger lived for photography. He was interested in his echo, not in his ego. And thus, while we are acquainted with the many pictures that have gained worldwide acclaim as classics of photographic history, we know very little about his life behind and away from the camera", the foreword states.

"Biography", Janet Malcolm penned in The Silent Woman, "is the medium through which the remaining secrets of the famous dead are taken from them and dumped out in full view of the world." Thomas Buchsteiner's biography of Andreas Feininger, however, is not of that sort, it is simply an informative book, a solid piece of facts gathering - an exciting read it is not. That does not mean that there is no interesting and at times fascinating information to be found in this tome - there is, there is! To illustrate this, let me quote from the book:

It was also important to him to make the cycle of life comprehensible through his nature photographs, to illustrate relationships of interdependence, and to show how we are also involved in those relationships as living beings. At some point during the nineteen-sixties, he was fond of explaining this with reference to the example of the spider he had once observed from his desk - for the insect's lifetime and several days beyond - in the corner of a window in the workroom of his house in New Milford. The tiny organism, no larger than a pinhead, grew over the course of the summer into a stately spider. The spider does not hunt for food: it depends on chance prey, on flies and other insects that are caught in its web by accident. The spider simply waits patiently. Its web is an incarnation of geometry, clarity, and symmetric design, supremely economical and constructed instinctively with a minimum of material, an architectural masterpiece spun with a degree of tensile strength that, pound for pound and inch for inch, surpasses even that of steel. The spider also depends on other living things and could not survive alone. With the exception of certain bacteria, no living organism can exist in complete independence, every organism plays a part in the sympphony of life as Andreas Feininger wrote repeatedly in his many books about the 'language of nature'.

Andreas Feiniger's explorer's approach to nature, his photographic view and mode of interpretation are essentially neo-naturalistic. He focused on and emphasized the alliance of art and nature in a world that has come to be dominated by technology. With the aid of an architectural ordering system, he visualized processes of creative design in life, be they man-made or natural. He realized and revealed the implicit and explicit structures and forms of these objects, regardless whether they are organic or mechanical. The exploration of forms of nature through a search for geometric structure and artistic parallels had also become a popular pursuit among other photographers, especially in Germany since the nineteen-twenties. Karl Blossfeld's blades of grass resembled knife blades. Visually speaking, Albert Renger-Patzsch's blossoms optically appear as inorganic objects. Paul Strand photographed plants as machines. Of course, Andreas Feininger could hardly deny his biographical background and certainly not the Bauhaus and his training as an architect and engineer. The New Obectivity enobled both natural and artificial objects, memorialized their forms and functions, and celebrated their beauty through their apotheosis.