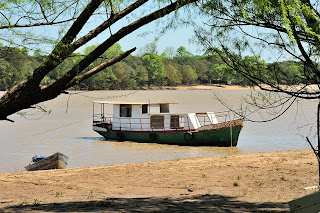 Once a semester, the Schütz & Kanomata crew in Brazil's Santa Cruz do Sul goes to have fish on the boat-restaurant in Rio Pardo, a picturesque town situated about 135 kilometers to the West of Porto Alegre.

Photographs are considered evidence of things being observed. While I have no doubt about that, it is what they trigger that makes them so special to me. Take the nicely framed pic above, for instance: the fact that it confirms that the boat had been there at a specific time is one thing, the other thing is that it triggers so many other pictures. "Photographs are associative images - they are Rorschachs," says San Francisco-based photographer Emelle Sonh.

So what images did this boat-picture by Ricardo Schütz trigger in my case? Many, of course, and mostly unrelated to the boat-restaurant - yet prominently among the Rio Pardo-related ones were several images of the superb cakes and coffee in the cafeteria of the Centro Regional de Cultura Rio Pardo ...

By the way, the pic above does not show the boat-restaurant (which is of course much bigger) but was probably taken from there.
Posted by Hans Durrer at 00:01

The floating restaurant was not a thing of luxury, but the food was superb. Furthermore, although the river is always pardo, (gray, dull, brown), it is capable of a variety of water levels. I want to go back to that restaurant when the river is flooded and there's one of those glorious thunderstorms. Hans and I already experienced the rain-induced cave-in of the roof of one restaurant in the region. I never laughed so hard in all my life as when that happened. Knowing Brazil, something wonderfully crazy could happen again, on the Rio Pardo.

Thanks for reminding me of the rain-induced cave-in ... a truly unique experience ...