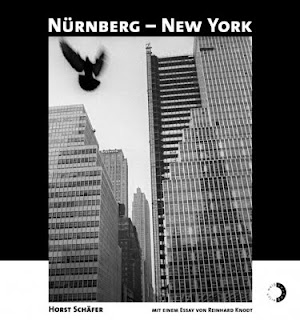 What an idea, to juxtapose images of Nürnberg and images of New York City! Can that work? Yes, it can! Provided the photographer understands his craft as superbly as Horst Schäfer does.

New York is known as a unique city - and it is. Horst Schäfer shows us that Nürnberg is equally unique - and that they both aren't for, as these photos convincingly demonstrate, one can choose to see that the two cities also have quite some views in common. Sounds like a contradiction? Well, contradictions only exist in our minds, in real life they sit comfortably next to each other - provided we let them, of course.

"Horst Schäfer's images are never mere reproductions or 'views', but always moments of vision, brief yet decisive seconds in which something is 'seen'", Reinhard Knodt writes felicitously in his toughtful essay "Photographing the City - On Horst Schäfer" that accompanies the photos in this tome. This is how he comments on Schäfers' shot of the Brooklyn Bridge: "At the moment the shutter is released, the faces of the people crossing the bridge become visible in the spaces between the suspension cables. To calculate this moment, a mere tenth of a second, is simply impossible. It must be seen and arrested at its point of genesis."

What Reinhard Knodt penned about the shot of the Brooklyn Bridge is equally true of the other shots in this book - for examples, go here. Rarely has it been more apparent to me that Cartier Bresson's "decisive moment" is much more than a mere stroke of luck - to capture it depends also on patience, talent, the right attitude as well as "the good eye". There is no question that Horst Schäfer has all of that.