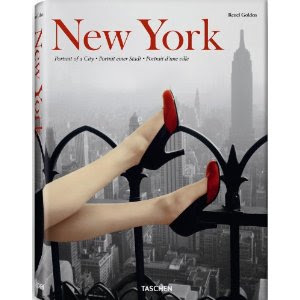 500 historic and contemporary images - by, among many others, Berenice Abbott, Walker Evans, Arnold Newman, and Helen Levitt - give testimony of what made and makes this city tick. Once again I was amazed how many of the shots that touched me had been taken by anonymous photographers. 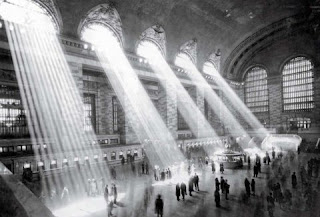 "The one constant throughout New York City's history has been its ability to change, adapt, and reinvent itself." This is how Reuel Golden, formerly the editor of the British Journal of Photography and executive director at Photo District News, begins his text about this famously unique city, full of "restless energy". No wonder then did E.B. White ("Here is New York", 1949) state: "By comparison with other less hectic days, the city is uncomfortable and inconvenient; but New Yorkers temperamentally do not crave comfort and convenience - if they did they would live elsewhere."

There are also biographies of the photographers to be found as well as pages on recommended viewing, recommended listening, and recommended reading (I was pleased to discover that Hubert Selby's Last Exit to Brooklyn and Oscar Hijuelos' The Mambo Kings Play Songs of Love were included). In short: here you get all the information you need for preparing a trip to New York - or for staying home and enjoying this extraordinary city from a distance. 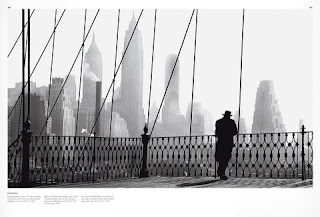 Whoever has been to New York City will find food for memory abound in this tome. In my case (I've been there once, thirty years ago, for a few weeks), the photographs that mostly triggered associations were the street scenes, and the architecture - and they made me want to revisit this city.

As intriguing it is to let oneself be guided by photo documents, we are well advised to always remember that what we see in pictures is what we bring to them, and thus read into them. Let me elaborate:
On 11 September (or September 11, as North American logic goes) 2001, Thomas Hoepker of Magnum Photos took a photo of casually dressed people at the Brooklyn waterfront that he kept unpublished for four years out of fear, he said, "it would stir the wrong emotions." On 10 September 2006, Frank Rich of the New York Times, commented on the photo:
"It shows five young friends on the waterfront in Brooklyn, taking what seems to be a lunch or bike-riding break, enjoying the radiant late-summer sun and chatting away as cascades of smoke engulf Lower Manhattan in the background."
Needless to say this is a plausible way of looking at this photo, especially in light of what Thomas Hoepker, the photographer, had to say about it: "They were totally relaxed like any normal afternoon. It's possible they lost people and cared, but they were not stirred by it."
The reality of the people portrayed was however a totally different one. Here's what Walter Sipser, a Brooklyn artist, who is the man on the far right of the photo emailed to Slate: "Had Hoepker walked fifty feet over to introduce himself he would have discovered a bunch of New Yorkers in the middle of an animated discussion about what had just happened. He instead chose to publish the photograph that allowed him to draw the conclusions he wished to draw ...". 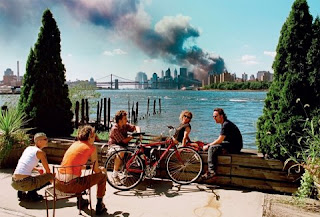 does anyone know the artist of the cover of this book?

The front cover is by Edward Kasper: a fashion shoot for Glamour magazine, 1950.
The back cover is by Paul Himmel, also from 1950, and called Brooklyn Bridge View.