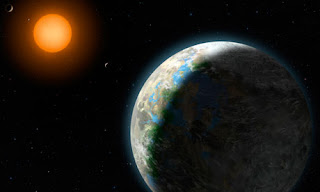 Astronomers have discovered a potentially habitable planet of similar size to Earth in orbit around a nearby star.

The planet is in the "Goldilocks zone" of space around a star where surface temperatures are neither too hot nor too cold for liquid water to form.

"Our findings offer a very compelling case for a potentially habitable planet," said Steven Vogt, an astronomer at the University of California, Santa Cruz. "The fact that we were able to detect this planet so quickly and so nearby tells us that planets like this must be really common."

If confirmed, the planet would be the most Earth-like that has ever been discovered in another solar system and the first strong contender for a habitable one.

More than 400 exoplanets have been discovered by astronomers, but most are gas giants, like Jupiter, that would be inhospitable to life as we know it.

Astronomers used the Keck telescope in Hawaii to study the movement of Gliese 581 in exquisite detail and from their observations inferred the presence of a number of orbiting planets. The team report two new planets in the Astrophysical Journal, bringing the total number known to be circling the star to six.

One of the planets, named Gliese 581g, has a mass of three to four times that of Earth and takes 37 days to orbit the star. Astronomers believe it is a rocky planet with enough gravity to retain an atmosphere.

Unlike the previously discovered planets, Gliese 581g lies squarely in the region of space were life can thrive. "We had planets on both sides of the habitable zone — one too hot and one too cold — and now we have one in the middle that's just right," Vogt said.

"Any emerging life forms would have a wide range of stable climates to choose from and to evolve around, depending on their longitude," Vogt said.

The average temperature on the planet is estimated to be between -31 to -12C, but the ground temperature would vary from blazing hot on the bright side and freezing on the dark side.

"The number of systems with potentially habitable planets is probably on the order of 10 or 20 percent, and when you multiply that by the hundreds of billions of stars in the Milky Way, that's a large number. There could be tens of billions of these systems in our galaxy," said Vogt
Ian Sample: New Earth-like planet discovered
The Guardian, 29 September 2010
Posted by Hans Durrer at 00:01