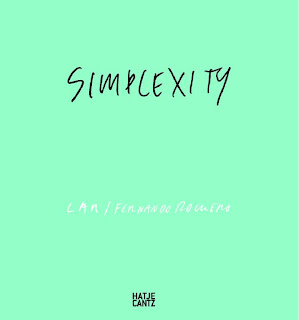 The architect Fernando Romero, born 1971 in Mexico City, worked from 1997 to 2000 in the offices of Rem Koolhaas in Rotterdam. In 2000, he founded his Laboratory of Architecture (LAR).

"Simplexity" presents a selection of his projects and provides an overview of his visions, drafts, and buildings, and thus documents the progress of LAR in the first ten years of its existence.

My impression? I thought the projects and buildings in this tome extraordinary and fascinating, all of them, and would be hard-pressed had I to name a favourite.

Architecture, according to Fernando Romero, "is produced through a continuous translation process. What we do in our daily practice is the translation of restrictions, ambitions, challenges, conditions, political and economic moments into structures that contain usable spaces with unique identities."

Take the Seoul Performing Arts Center for instance: its design was inspired by the Ying-Yang concept (the idea of keeping opposites in balance), the defining principle of Korea's identity. So how does one translate that into architecture? Romero and his partners opted for a sponge-like structure in which the main forums are suspended.

Or take the Torre Bicentenario OMA/LAR that was meant to commemorate Mexico's bicentennial of its independence and the centennial of its Revolution. What did Rem Koolhaas and his team (OMA) and his local partners (LAR) come up with? "... the building is formed by stacking two pyramidal forms resembling those typical of Mexican prehispanic temples, forms familiar and unexpected, historic but also visonary."

Many architects, Romero has observed, are not keen on working in China and with the Chinese respectively but for him this collaboration is interesting because there are many similarities between China and Mexico. "In our case, our bridge in Jinhua was produced with immense similarity to the way projects are done here in Mexico." Unfortunately, the interviewer did not ask him to elaborate.

After leafing yet another time through this tome, I realise that I come back again and again to the Bicentennial Moebius Ring which has a single continous face that is two-dimensional at every point. As Raymund Ryan penned: "It embodies the notion of simplexity - it is geometric yet not static, with a single contiguous surface linked here to key dates in Mexican history."

But then again, I also come back again and again to the Mexico Pavilion in Shanghai and the Mercedes Benz Business Center in Yerevan, Armenia, and and and ... Simplexity is a tome worth spending time with. 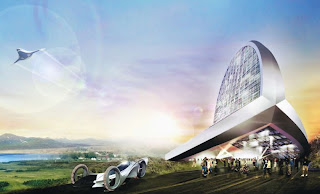