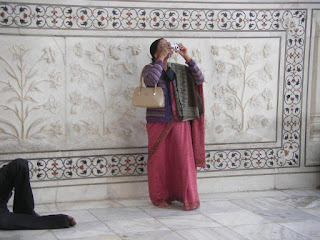 Taking a photograph at the Taj Mahal
Copyright @ Hans Durrer

Are you full tonight? I ask the receptionist of my hotel in Jaipur. Yes, he says. How many rooms do you have? 22 of which 17 are occupied by orthopaedists who attend a conference nearby. The next morning at breakfast, two of the orthopaedists (they had already inquired at the reception where the only non-Indian in the hotel was from) approach me and want to know where in Switzerland I am from for they would soon attend a conference in Zurich.

Sanjay deals in garments. He will soon be going to Mexico on business. Do you speak Spanish? I inquire. That is not a problem, they speak English, he says. His English isn't too good but that is not a problem either because the garmet business is mainly about the quality of the garment (and this can be felt) and figures.

His brother asks whether I've been to Italy. Florence is very nice, Naples not at all, he says and adds: Italians also speak English and are very much like Indians. I automatically think of chaos ... 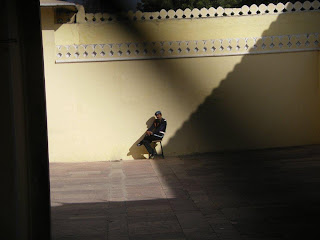 Guard inside the City Palace in Jaipur
Copyright @ Hans Durrer

India is a feast for the eye - a photographer's paradise.

You ask somebody for directions and in seconds you will find yourself surrounded by ten to twenty onlookers.

No rules, comments my driver on the traffic. Do cars in other countries go all in one direction? he wants to know. Generally speaking yes, they usually do not come from from left or right or towards you.

I walk into a beauty parlour. Do you also do nails? I ask. The hairdresser (I assume he is a hairdresser because he had been sleeping in a hairdresser's chair) nods. Manicure and pedicure? He continues to nod, I however have that clear feeling that he will nod to whatever I will suggest.

Indians prefer politeness to honesty, I had heard the other day. And business over no business, I guess.

Ever had Manchurian Cauliflower? One of the most exotic dishes I've ever had. You can get it in Delhi, at Connaught Circus h 27.

Very accurate observations.
It sounds like Inda hasn't changed since 1979 when I was there ...