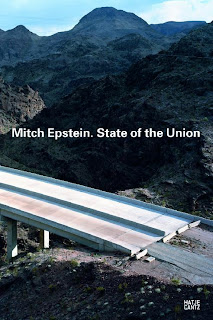 "If the photographer is able to capture the momentum in which the accidental reveals something fundamental, his photograph will not only describe a singular event; it will also, at its best, become a document of universal relevance. The photographs by Mitch Epstein definitively possess this double transparency: they are, to a great degree, typical of their time, not only due to the motifs they depict, but also because they reflect the atmosphere and social climate of the moment in which they were made", writes Christoph Schreier in "Structure and Contingency in Mitch Epstein's Photographic Work".

Okay then, let's take a look at the photograph on the cover: does it really reveal something fundamental, is it a document of universal relevance? After having spent quite some time with this shot, in different moods, during the day and at night, I'm not so sure. In fact, I'm at a loss whether this photo (it shows the Hoover Dam Bypass Project, Nevada, and was taken in 2007) reveals anything more than it shows: an unfinished highway bridge somewhere in the mountains.
Stephan Berg, who wrote the essay "Empathy and Distance", disagrees: " ... the astonishing thing about Mitch Epstein's large photo series American Power (2003-08) is that everything these images want to say can actually be seen in them. The subtexts of this series are not claims that need to be brought to the photographs from the outside; instead they find their correlation directly on the image surface."
Well, judge for yourself.

By the way, don't get me wrong, I do like this picture - for the simple fact that it pleases my eyes.

Photographs are often considered comments on situations/events and, of course, sometimes they are, and quite obviously so - just think of the pics that showed people celebrating on the Berlin Wall the night it came down. More often, however, we need context explainers to enlighten us about the significance of what is unfolding in front of our eyes: they rarely talk about the feelings they've experienced when looking at, and into, the photographs they are elaborating on, instead they let us know what we do not see but will have to take into account in order to understand what our eyes our showing us - so they claim. Such texts (together with an interview with Mitch Epstein) can also be found in this tome.

My approach is different: photographs attract me or they don't. My interest in exploring the ones that do not speak to me is almost zero which is why I concentrate on, and spend time with, the ones that appeal to me. Let me give you an example from "State of the Union" 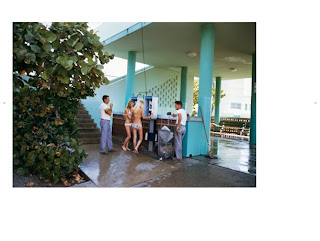 It strikes me as a very intimate pic, I perceive the two young girls in their bikinis as vulnerable in these surroundings although the two guys (they look like cleaners) do not appear to be threatening. On the other hand, they do not seem to leave the two girls alone either. Why don't they move on and let them do their phone call unobserved? Or do they somehow belong to the girls? Could it be that one of the girls (are they sisters, are they friends?) needed to urgently call home and the two men had shown them where the phone was? Idle speculation. We can't know what we are looking at if the photographer doesn't tell us how the photo came about. Yet the intimacy, the vulnerability, the fragility that many of the photos in this tome (especially when humans are shown in their not so natural surroundings) radiate, can be felt by everyone, I believe - and that is a remarkable achievement.

PS: I've sent the above text to the San Francisco photo-artist Emelle Sonh and then the following exchange ensued.

Emelle Sonh:
I think the freeway photo on the cover, along with the book title is not only clear, but blatant to the point of being cliché. The State of the (U.S.) Union is not going anywhere ... is broken, has inadequate energy to continue "making roads" - a path - America, famous for it's cars - no more freeways being built - if you drive on this abruptly unfinished road as though the freeways of old America were the strong routes they once were ... you will fall off the end ... maybe fatally so ... Bold blatant visual image to my mind.
The girls and guys is more ambiguous, though maybe with a larger image, I could feel more in it. I don't necessarily feel the girls' vulnerability, but the interpretation of this one could go in many directions. A title might help, as you often say. This is a good example of "there is no right answer when viewing images" and so long as it is not used to sell coca-cola, I am fine with the ambiguity.

Hans Durrer:
I think you're right in regards to "blatant to the point of being cliché" but would still argue that all this is brought to the picture ... what is there is still nothing but an unfinished bridge. I guess my different stance has also to do with my refusal to simply go along with other people's implicit (and too often clichéd) assumptions. In other words, if this guy had in mind what you (probably rightly) assume he had there would have been definitely many more ingenuous ways to illustrate that ... a car stuck in a pothole, for instance, or whatever ... ....

Emelle Sonh:
I agree the photo is of an unfinished freeway - period. We bring interpretation/meaning - always... and, I also agree that the blatant, cliched expression of his idea was not very imaginative, deep or subtle ... or layered ... personally, I'd prefer the pothole - at least less obvious expression of the obvious - American Decline.