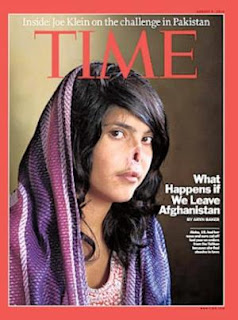 The cover of Time magazine's issue of 9 August 2010 shows a shocking picture of an 18-year-old Afghan woman whose nose was hacked off as punishment after she fled an abusive husband, we learn from the photographer Jodi Bieber. In fact, not only her nose was cut off but also her ears.

Next to the picture there is the headline (that serves as a caption) that says: "What happens if we leave Afghanistan".

The columnist Tom Scocca, on the Slate website, called the picture "gut-wrenching" but suggested that "a correct and accurate caption would be 'What is still happening, even though we are in Afghanistan'".
I couldn't agree more.

I now feel like adding a postscript for I've just come across "What's right with this picture?" by Susie Linfield's piece in Dissent magazine:
"... it is bad faith of the worst sort to argue that withdrawal would somehow help the women of Afghanistan; or would rescue them from lives of almost unimaginable pariahdom, misery, poverty, physical pain, poor health, ignorance, and degradation; or would not take away even the minimal gains that have been made. Equally bad, I think, is the pretense that a “deal” with the Taliban won’t somehow come at women’s (and children’s) expense. Let’s at least call barbarism by its right name—which is just what the Time photograph did."

I do agree, this is exactly what the Time photograph is all about. Yet the text next to the photograph ("What happens if we leave Afghanistan") is an entirely different story. There is no doubt in my mind that withdrawal would clearly not help Afghan women; there is however equally not a doubt in my mind that the Nato governments clearly did not send their troops there because they care about Afghan women. And so, when Susie Linfield asks "What's right with this picture?" the answer is: everything - and the World Press Photo 2011 award is well deserved. It is the caption that is wrong, it should have read: this is what is happening in Afghanistan.
Posted by Hans Durrer at 00:01