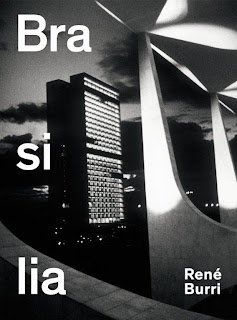 © René Burri / Magnum Photos
The first picture you get to see when you open this formidable tome shows you the view from behind the steering wheel of a bus and what you see in front of you is a road where a car has just started to overtake a truck while above, in the sky, you see an airplane that is coming towards you. On the next page a map is displayed that shows the way from Rio de Janeiro to Brasilia, followed by photographs that show vehicles, roads and aerial views from 1958 and 1960 - to find out what your eyes are showing you, you need to turn to the captions that are found on pages 211 pp (most photo books do not put their captions next to the photos - a common but nevertheless incomprehensible practice, especially in the case of documentary photography).
Then follows a text by Clarice Lispector where one reads: "I look at Brasilia the way I look at Rome: Brasilia began with a final simplification of ruins. The ivy has not yet grown.- Besides the wind there is another thing which blows. It can only be recognized in the supernatural rippling of the lake.- Wherever you stand, you have the impression of being on the margin of a dangerous precipice. Brasilia stands on the margin."

I must admit I'm at a complete loss as to what these words mean yet I kinda like them because I have decided to like Clarice Lispector since I discovered her while in Brasil. How come? I warmed to a photo of her, I guess, and I do very much like this quote of hers: "Eu escrevo sem esperança de que o que eu escrevo altere qualquer coisa. Não altera em nada... Porque no fundo a gente não está querendo alterar as coisas. A gente está querendo desabrochar de um modo ou de outro..."

Some photos are in black and white, others are in colour - and quite some of them are impressive, as documents and as compositions. One of my favourites is a black and white one, taken in 1960, on page 70 that shows two leafless trees in the foreground, a couple (he is holding a briefcase, she an umbrella) in the distance, and an apartment building in the background while a storm seems to be brewing. As much as I'm taken with this pic, its title or caption "Utopia becomes Reality" is beyond me. Another pic that I very much like can be found on pages 160/161: it is a colour shot of five people (four males, one female, of different ethnicity) looking attentively in one direction, they are probably watching a football game. Since I can't be sure (and since I would like to know what my eyes are registering) I turn to the caption on the last pages of the book where I read: "Crowds in Brasilia, 1977. The picture exemplifies Brazil's ethnically mixed and tolerant society." Apart from the fact that "crowds" is probably not the most appropriate word for these five spectators, this caption (and the previous one - there are many more of this kind in this tome) makes one wonder why they are so uninspired - and uninspiring? Is it because photographers can't write? In the case of René Burri this doesn't hold - just read his well-told Brasilia story on page 201. By the way, there is also another informative text to be found in this book, Arthur Rüegg's elaborations entitled "René Burri's Journeys to Brasilia.

But let's get back to the photos: they were taken between 1958 and 1997 and invite you to visually visit one of the most fascinating cities on the planet. My wish to go and see for myself how this place must feel like has once again grown stronger.