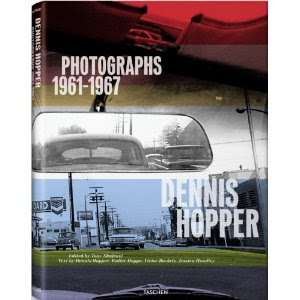 It was James Dean who urged his friend Dennis Hopper to start taking photographs – and what you get to see in this heavy (over 4 kilos on my scale) tome proves that this was a really good idea. As Piers Morgan most convincingly penned: „A stunning new book with intimate behind-the-scenes movie-set photographs. It's an extraordinary book, almost paparazzi in its feel, yet way too artistic for that genre.“

However, I'm not sure how much time Piers Morgan spent with this book because there is much more to see than these fabulous movie star shots that instilled in me the strange sensation of having lived through these times although I'm a bit too young for that. It is not the first time that old photographs seem to radiate something from my past when in fact they were taken long before I was born. It's probably to do with the fact that when young we tend to look at pictures (the same goes for movies) of people and scenes from a past before we were born. 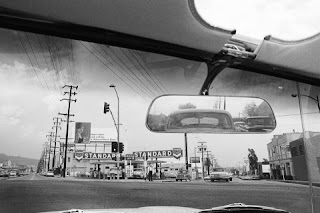 The title of this formidable work is somewhat misleading for we do not only get to see photographs that Dennis Hopper took from 1961 to 1967 but also lots of shots of Dennis Hopper (many by William Claxton) and of others, from the fifties, and .... but let me be slightly more specific: this volume starts with „The Taos Incident“, a text by Walter Hopps that explains why it is that we get to see these photographs (and how come that they do exist at all). Then follows a chapter entitled „Visions of Dennis“ (which of course shows lots of pictures of Dennis), followed by photographs („Abstract Expression“) that demonstrate Hopper's early influences:“ ... I was a product of Abstract Expressionism and Pop Art.“ These pics left me rather cold, quite contrary to the ones presented next: great scenes from „On the Road“ (some of his most convincing are from Mexico: „Mexico always held a fascination for me“, he says and it can be felt) and quite some remarkably intimate shots from „Inside Hollywood" with, among other images, pictures of 1712 North Crescent Heights, the Hopper's new house (the famous Bel Air fire in 1961 had burned their old house to the ground) that Andy Warhol described as „furnished like an amusement park“. 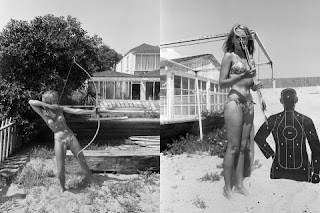 Then there are also (some amazing) shots from the New York and the West Coast art scene, followed by a truly impressive chapter called „The Scene“ that is about the coming together feeling of the sixties with pics of, for example, Buffalo Springfield, and Martin Luther King addressing a crowd in Selma, Alabama.

The book concludes with "In the Moment", over one hundred pages that pay hommage to Dennis Hopper's life and career with rather unique pictures - Hopper and Michelle Phillips fully dressed in a bathtube in Taos, a most remarkable shot by Dennis Stock on the set of "The Last Movie", Hopper directing a simulated sex scene for Hustler magazine ... and many more ...
Dennis Hopper: Photographs 1961-1967
Edited by Tony Shafrazi
Text by Dennis Hopper, Walter Hopps, Victor Bockris, Jessica Hundley
Taschen, Cologne 2011
www.taschen.de
Posted by Hans Durrer at 00:01