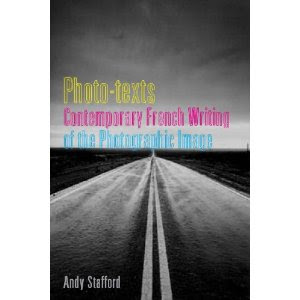 This is an academic book, I'm not an academic, and my interest in academic books is remote – so why do I then bother introducing an academic book? Because I take from books what I like, and sometimes what I need, and in my experience good stuff can be found anywhere, and that includes academic books. Moreover, I'm very interested in the combination of words and images.

Andy Stafford's Photo-texts: Contemporary French Writing of the Photographic Image is based on nine case studies from the 1990s' French-speaking world (from France, North Africa and the Caribbean) and "attempts to define the interaction between non fictional written text (caption, essay, fragment, poem) and photographic image."
Since I'm not much into who wrote what, where and when, and since I do not really have the stomach for differentiating for the sake of differentiating (this is my view of most academic work), let me give you some of my personal nuggets (arguments that made me ponder previously neglected aspects; that however does not mean that I necessarily agree with them) of this tome:

"The book will answer, in very simple terms, the question posed recently by W.J.T. Mitchell, 'What do pictures want?' with the simple answer (in respect of photography at least): language."
"... a photograph, photographs, photography, have a radical provisionality in relation to language, which says that, within 'reason', any photographic image can be changed, to 'mean' something else, including the polar opposite of its original 'intention'; that, to quote Régis Debray, '(o)n ne peut pas faire dire à un texte tout ce qu'on veut – à une image oui' ..."
"Apprendre à 'lire une photo', n'est-ce pas d'abord apprendre à respecter son mutisme?" (Régis Debray).
"How to decide, now, what is 'good'? And perhaps this will be a function of the photo-text: a distinction of the good from the babble of contemporary photographic practice."
"... photography does not belong to history; it gives history; (...) the truth of history is to this day nothing but photography." (Eduardo Cadava).
"For Flusser, the battle to 'break' the magic circle which photography forms around us is a battle to recognize the automatic nature of the photograph, to accept that we can only think currently in 'photographic categories', in short, not to allow the apparatus, the camera, to enslave us to the perceived magic of the photographic image."
"Il n'y a aucune innocence à presser le bouton (...); sa banalisation extrême nous fait oublier le sens d'un acte dont il faut réapprendre combien il implique notre présence au monde et le rapport que nous entretenons avec lui. (...) Il nous faut (...) y éduquer le regard." (Anne-Marie Garat).
"... what matters in photography is what it does, not what it is."
I readily admit that the selection of these quotes has been rather arbitrary – the ones I consider pretentious nonsense: "écriture et photographie n'ont pas à se completer l'une l'autre, mais à s'éloigner autant que possible l'une de l'autre, si elles veulent peut-être se recontrer" (Gilles Mora), I did intentionally leave out. And I could of course have chosen quite some others. May the ones presented here arouse your curiosity!
PS: The notes and the bibliography alone merit the acquisition of this work. A richer source on the topic of photo and text is difficult to imagine.
Andy Stafford
Photo-texts
Contemporary French Writing of the Photographic Image
Liverpool University Press
Liverpool, 2010
Posted by Hans Durrer at 00:01