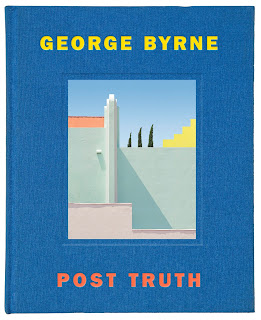 These pics are simply gorgeous! To me, they are a perfect unreal aesthetic pleasure. Unreal? What was photographed is real! Right but that is not the way these photographs appear to me – the equivalent of McDonald’s ice cream: totally artificial, and tasting great!

Ian Volner, in his accompanying essay “Unreal City: The Urban Sublime of George Byrne,” explains that when Byrne returns from roaming the street to his computer “he then laboriously sifts through these sharp, contrast-heavy images, and choosing elements from various of them he starts to meddle, using photographic software to cut, paste, re-color, and generally monkey around.” No wonder his pics look unreal! That they should, as Volner claims, also disclose “a deeper truth about the cities we inhabit and how we inhabit them” I do however consider nonsense for by highlighting the surface you make any underlying depth (“a deeper truth”) insignificant.

George Byrne, born 1976 near Sydney, Australia, arrived in Los Angeles on September 23, 2010. “I remember looking out of the plane window and being taken aback by the scale of the urban sprawl, the vast tracts of shimmering, dusty pink-grey suburbia. Even from way up there, I thought it looked strangely beautiful. Later that same day, driving through the streets of L.A. for the first time, I was transfixed. There was so much light that the streetscapes seemed to become two-dimensional, angular cutouts. Shadows dissected the open space and figures occasionally floated by like ghosts. It felt free, wild, and open. Laid out in front of me in that moment, I saw what would go on to form both the basis of my artistic practice and the essence of this book.